Biochar in a bathtub 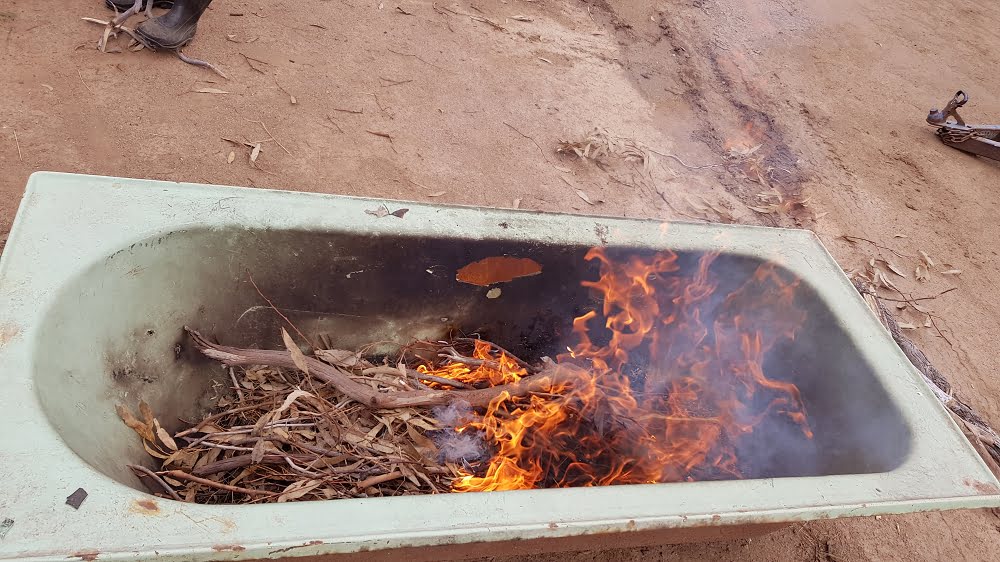 We became big fans of biochar years ago when we went to this workshop. Then we held our own workshop on the farm to learn how to make biochar vessels out of 44 gallon drums.

Despite all of that, we’ve never made it ourselves, because it seems like a lot of effort to produce a small amount of biochar.

The next workshop we went to may have changed that thinking! We were lucky enough to go to a small, privately run workshop that introduced us to a much simpler system for making biochar in a bathtub.

It was hosted for us by Grow Great Fruit members Win Westerhoff (below left) and Clare Claydon, and the workshop was run by Jim Sansom (below right), who started by talking us through the main steps of the method.

The bathtub method is based on the ‘Kontiki Cone Kiln’, which is a large (about 1.6 m across) kiln for making biochar, but is a much simplified version.

One of the challenges with this method is that there’s no hard and fast rules about when to stop the burn. “Judge when to stop” was Jim’s advice, “when a stick has lost its identity as a stick”.

Another thing to know before you start is don’t use a cast iron bathtub, or it may crack when you light a fire in it. And obviously don’t use a modern plastic or fibreglass bath either – you need to find an old steel bath at your local tip shop.

At the workshop we went through the actual process of making biochar under the expert tutelage of Jim, Clare and Win — and it wa:s surprisingly fast and easy.

Here’s how it works:

Step 1 – Fill the bottom of the bathtub with light, dry fuel.

Step 2 – Light it on fire. (Pro tip: use a bit of metho if needed). Aim to get a good strong fire going along the whole length of the bathtub.

Step 3 – Once it’s burning, pile up with bigger stuff, but make sure it’s burning the whole length underneath. (Pro tip: this is much easier on a still day than a windy one.)

Step 4 – Stack the bath until it’s 3/4 full. If the fire is burning well, it shouldn’t be too smoky. It’s fine to use bigger wood in the bathtub as long as it’s all roughly the same size so it burns at about the same rate.

Step 5 – Use a metal rake to pack the wood down hard, and to keep the fire burning evenly and everything burning at the same rate. The gases will be pushed out of the wood and are then burned in the bathtub, which prevents oxygen getting down into the fire. If too much oxygen gets into the fire the wood will just burn away to ash. New research has shown that if the biochar is made at a lower temperature you end up with biochar that has a higher level of organic matter.

Step 6 – When you judge that most of the material is blackened to char, quench the whole thing with a hose.

It’s OK for sand, dirt, clay and mud to be on the wood and in the cooking process, and in fact this may be beneficial by creating a more highly mineralised final product.

How do you apply the finished product? We’ve covered this before in other blogs, but here’s the methods that Clare and Win use:

The point is finding some way to incorporate biochar into your soil where it will work its magic.

Of course it’s not magic, it’s science! Biochar has remarkable effects in soil by providing both a stable form of soil carbon, and by providing amazing (and extensive) habitat for soil microbes. If you still need convincing of just what an awesome impact this can have on your soil, you may want to take our Soil Biology and the Soil Food Web short course.