As we were planting some cherry trees this winter, we pruned both the roots and the tops of the trees as we normally do when planting, but this year we did something a bit different. Instead of throwing them away, we saved all the ‘rubbish’ to try a new experiment – root grafting!

Root grafting itself isn’t new; like all grafting techniques, it’s been around for a long time. It’s easy to imagine some enterprising gardener, possibly hundreds of years ago, thinking to herself  “I wonder what would happen if I attached this piece of root to this piece of wood and planted it?”

Merv tying up a root graft

Luckily at the farm we have access to Katie’s dad Merv, who is a trained grafter and orchardist with 60 years’ experience to guide us! He’s done root grafting before, but never tried it with cherries, so it’s a bit of an experiment for him as well. One of the inspirational things about Merv is his willingness to experiment and try new things in the orchard and nursery, making him an innovative and creative farmer.

There’s lots of different types of grafting, the three main ones we use on the farm (and teach about in the Grow Great Fruit program) are whip-tongue, cleft and bark grafting. Root grafting uses whip-tongue grafting, which is one of the easiest and most reliable forms of attaching the rootstock (in this case – the roots!), to the scion wood, or the wood that comes from the variety you want to grow.

The root and grafting wood (scion) joined together with a normal whip tongue graft.

They’re attached together in the normal way, but here’s where one of the differences from normal grafting lies – when the new grafted tree is planted, the union is under the soil! Now anybody who knows anything about fruit trees will know this might lead to a couple of issues:

1. The tape that is used to seal the graft union will have to be cut, which will be slightly more awkward than usual because it’s underground. There are two solutions to this problem – when the time comes to cut the tape that binds the graft union together either just remove enough dirt to be able to get your knife down far enough to cut the tape, or use biodegradable ‘buddy’ tape which doesn’t need removing! 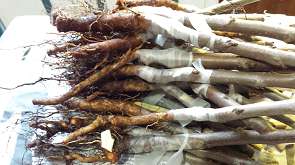 A bundle of taped cherry root grafts, waiting to be planted.

2. The scion might take root, which has the risk of robbing the rootstock of it’s characteristics. Now if you’re using roots from a dwarfing rootstock that could be a problem, because it’s likely that the scion wood will grow i’s own roots, and you’ll probably lose the dwarfing characteristics of the roots. Not much you can do about this, but just think of it as adding to the adventure, because you don’t know what characteristics your rootstock will have. 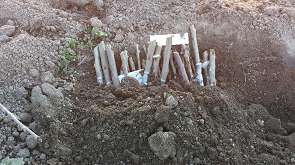 A bundle of cherry root grafts, ‘heeled in’ the soil waiting to be planted in the nursery.

We don’t know the outcome yet, and cherries are notoriously difficult to propagate in any of the normal ways (ie from seed or cuttings), but we’ve already had the warm fuzzy feeling of harvesting all the bits we’d normally discard as rubbish to turn them into something useful, and it’s going to be great fun watching to see what happens next!