Can you use biochar with fruit trees? 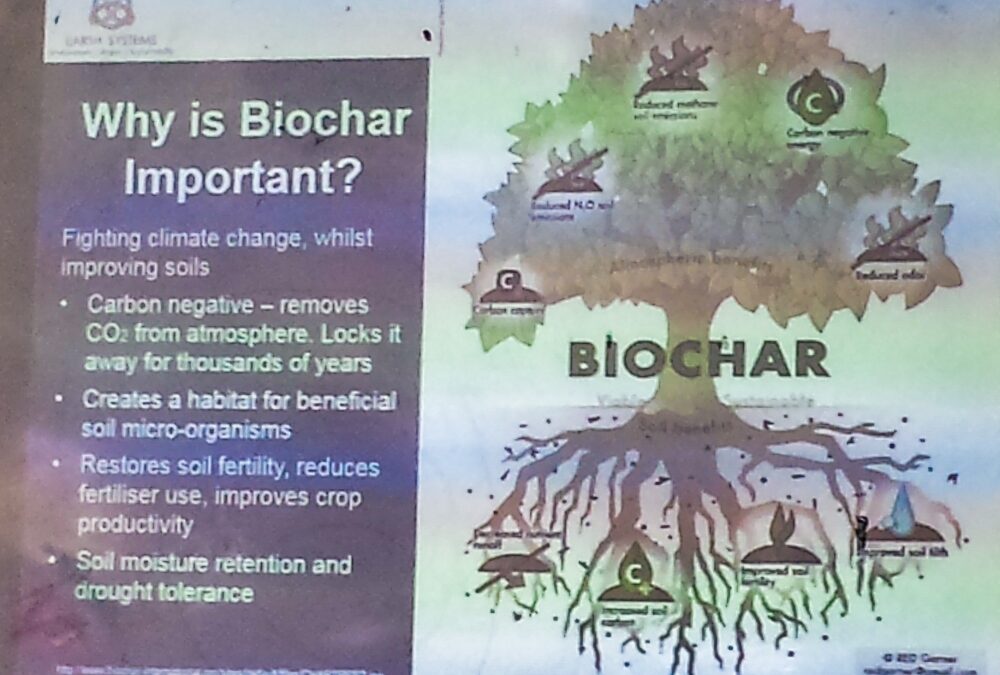 We’ve been interested in the possibility of using biochar with fruit trees since we went to a workshop on the topic, back in 2017.

It was one of those mind-blowing moments in our learning journey that opened our eyes to the full awesomeness of the stuff.

One of Australia’s leading biochar experts, John Sanderson from Earth Systems (on the left) delivered the workshop. He was joined by his colleague Lann Falconer. The workshop was held on a gorgeous day in the beautiful Growing Abundance Hub Plot Garden.

John made the point that biochar, as we know it now, is not a new soil amendment.

In fact, it’s been used for thousands of years by many cultures around the world. The most famous is the ‘Tera Preta’ soils discovered in South America. Similar types of soils have been found throughout Africa and other places, where biochar is actively used as a soil amendment to this day.

Despite some good early work on biochar in Australia, much of the activity has shifted elsewhere. Europe and California have become the hubs for biochar research. This is due to difficulties in attracting research funding and finding markets in Australia.

Considering Australia’s arid environment and propensity to drought, we reckon that’s a missed opportunity. Could biochar help you to keep your fruit trees healthier in a drought?

Biochar is mainly made of holes

While biochar is similar to charcoal, it’s a bit different, mainly because of the temperature.

The perfect range for producing biochar is 350°C–750°C, higher than charcoal. If you make it at a higher temperature you lose some of the properties that help make it so useful in the soil. If produced at lower temperatures it will still contain volatiles that may have a detrimental effect on the soil.

One of the amazing properties of biochar is its incredibly large surface area, from 500 to 600 square metres per gram.

This is what gives biochar its incredibly large surface area. It’s also what makes it ideal for both holding water and providing the perfect habitat for soil microrganisms—it’s basically like an empty block of flats for microbes!

Biochar is so good at holding on to moisture that it could be a game-changer for Australian soils. Just 4% in sandy soil doubles the amount of water that the soil can hold.

Growing fruit trees is a very practical way to help reduce climate change. You’ll be pleased to hear that adding biochar to your fruit trees can increase your impact.

Making biochar dramatically reduces the amount of greenhouse gas that is released into the atmosphere if it’s made from stuff that would otherwise rot, go to the tip, or be burnt.

When biomass is turned into biochar, approximately 50% of the carbon is burned off. The other 50% is turned into a highly stable form of carbon, which will last for at least 1,000 years in the soil.

For every ton of biochar, this represents 3.6 tons of CO2 sequestered (i.e. put into the soil). And it stays there for a long time.

But how much difference can it really make?

John reckons that if we could fill up three open-cut mines with biochar, we’d be about halfway back to when we took the coal out of the ground.

Biochar can also decrease emissions of nitrous oxide, which is another potent greenhouse gas. However, the mechanism is not yet understood. There have even been some situations where biochar application has made emissions worse, e.g., with the use of nitrogen fertilisers in dryland agriculture.

Before the workshop, we knew that using biochar with your fruit trees makes the soil much more fertile. Afterward, we also understand why.

It’s because of its awesome ability to hold nutrients and prevent them from being leached away.

It can get a bit technical, but when used in your garden, biochar has a positive effect in several ways. It can have a physical impact, affect how water is stored, and also have chemical and biological impacts.

This is because of the vascular nature of the source material.

Biochar dramatically increases the water-holding capacity of the soil because of the huge surface area and micropores.

The inoculation process (see below) puts nutrients into the biochar before you use it.

Science alert: the next bit gets a bit complicated, but if you like to understand what’s really happening in your soil then read on.

Biochar is made of carbon, which is the chemical backbone of all life. Biochar can carry oxidised groups such as phenolic groups (charge of -1) and coboxyls (charge of –2), which are anions and like to bond to cations such as calcium (Ca, charge +2), magnesium (Mg, charge +2), potassium (K, charge +1) and ammonium nitrogen (NH4, charge +1). These cations can be released to plants in exchange for hydrogen ions (H, charge +1), and thus act as a store of these cations needed by plants, reducing the loss of nutrients from leaching and thus reducing the need for added fertiliser.

Between 4% and 6% of biochar is biological carbon. Microbes can eat this carbon, and biochar is also the perfect microbial habitat. Biochar can encourage enzymatic processes. It also attracts fungal inoculation, which can happen even if biochar is out of the soil.

This is an industrial process that further erodes the biochar until more of the walls are gone and it becomes like coral. The process involves using oxygen, steam and high temperatures. It can increase the surface area even more, up to 2,000 square metres per gram.

You can make biochar by applying heat to any plant material (like fruit tree prunings) in a low-air environment.

First, the water boils out. If you were burning in the air (and not a closed container) the material would burn next. But because you’re doing it with less air present, the volatile gases are given off.

This smoke is acidic, and it’s important to make sure it’s burnt in the process of making your biochar.

When it’s made industrially, the smoke can be condensed and collected. Then it’s called either wood vinegar or smoke water. Though it’s acidic, it’s also very nutritious and has various uses.

The technical term for a sealed container for making biochar is a “retort”. At the workshop, John demonstrated a simple homemade retort made from a Milo tin with holes in the bottom that sat on a gas burner. It made biochar in about 20 minutes and really demystified the process.

You’ll often find biochar at the bottom of your wood fire, which is the wood that didn’t burn because air couldn’t get into all of it.

There are lots of different ways to make biochar, including in a bathtub or a 44-gallon drum. Whatever system you set up, the aim is to heat the stuff as little as possible.

However, it’s important to have enough air to burn the volatiles, or you generate massive amounts of horrible smoke. The most important thing is to NOT make smoke, there should only be a heat haze.

What can biochar be made from?

Biochar can be made from a wide range of source materials. Moisture content is not relevant, but the drier it is, the easier it is to light and to keep burning.

There are some things you should not make biochar from:

A typical fuel that works well is garden pruning waste about finger thickness. This burns about 25mm per hour, so wood with a diameter of 150mm will take about 6 hours to turn into biochar.

Keep stoking the fire under the drum until it’s all turned into biochar. You can’t tell until you open it, so notice the diameter of the wood as it goes in and use that to guide you.

There’s no need for a temperature gauge, but you can use one, particularly if using large pieces of wood. Drill into the middle of the largest and put the probe in, and burn until it reaches 500°C—that should make sure it’s finished.

Caution: the process can produce carbon monoxide and so should never be done in a closed environment.

This is a great technique for using fine material like sawdust.

Use a drum that is packed in a uniform fashion (like making a cigarette), and light the material at the top. It’s a good technique if you have a fine source material, as it burns uniformly down from the top and no air gets in so there’s no ash, just charcoal.

Once biochar is made it needs to be crushed, and a small mulcher is perfect for the job. The finer the better, about 3-5 mm is ideal, or slightly larger (10-20 mm) if you’re using it in potting mix.

Biochar must be ‘charged’ or inoculated before you apply it under your fruit trees. Otherwise, it will suck water and nutrients out of the soil to fill all the pores in the biochar, which can shock your trees.

So before use, biochar must be filled with water, nutrients, and microbes. Once it’s charged you can safely add it to the soil. Then the water and nutrients become available for the plants, and the magic can begin.

When inoculating, try to mix up a complex blend. It’s best to use a diversity of products from lots of different sources.

An easy way to inoculate the biochar is to keep it near your compost bin. Simply add a couple of handfuls of biochar to the bin every time you add scraps. The right ratio is about 1 cup of biochar to a small bucket of food scraps.

You can also add biochar to a worm farm, as worms LOVE biochar.  One of the tests performed to test any new soil amendment is called the Worm Avoidance Test. When biochar was tested in this way the worms flocked towards it. It has the worm tick of approval!

What to use for inoculation

Mix up your choice of inoculants from the following list, or the ingredients listed on the slide above.

Mix with your biochar and leave to sit for a week or two before applying it. Cover completely with water to prevent mosquitos from breeding in it.

Biochar plus worm tea or a complex of ingredients is the equivalent of creating rocket fuel for soil!

How to use biochar

We’re mainly interested in using biochar with fruit trees. However it’s useful for most plants in your garden, and also has a number of other uses.

It’s best to incorporate the biochar into the soil. If you leave it sitting on the surface it can actually increase the temperature of the soil because it’s pure black.

Here are some practical suggestions:

Biochar is without a doubt an exciting new (old) aid to growing healthy fruit trees.

But we completely understand that the idea of setting up a whole new system to make it can feel daunting.

John finished the workshop by mentioning that it’s completely fine to use biochar from your fireplace or bonfire. That surely makes it feel a bit more achievable!