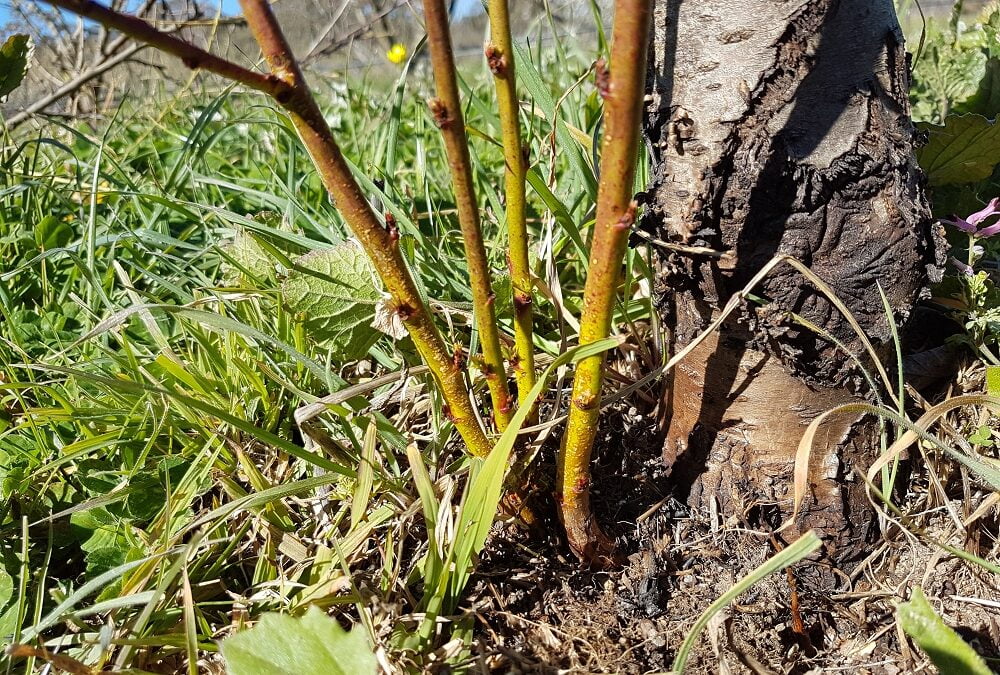 Removing fruit tree suckers is an important part of pruning.

The time for summer pruning of apricots and cherry trees is coming to an end. So we thought we’d share some tips about how to remove suckers properly.

Good question! Suckers are shoots growing from below the graft union on your tree.

Sometimes they’re growing directly from the roots and coming up through the soil near the trunk of the tree.

Most fruit trees are grafted. This means that shoots from below the graft union are growing from the rootstock, rather than from the variety.

Why should fruit tree suckers always be removed?

There are three very good reasons why you should always remove these shoots from your fruit trees.

It’s often better to illustrate these things rather than talk about them. Suckers are pretty common, so we have lots of photos to demonstrate what we’re talking about!

This photo shows the first reason why this is so important:

This is a little plum tree with two suckers coming up from the roots. Notice how they’re pretty much the same diameter as the original tree? In just one year, both suckers have grown taller than the original tree.

Just imagine, for a minute, what this scenario would look like in another year or two, if the suckers were left intact.

Within a very short space of time it would be increasingly difficult to tell which was the original grafted tree. In fact, there would be a good chance the original tree would be out-competed and die anyway.

If you have a multi-trunked fruit tree in your garden, this is one of the common explanations for how it got there.

Here’s another example which shows just how much stronger suckers often are than the grafted tree:

How to avoid making the problem worse

That brings us to the second reason for getting this technique right.

When you’re removing suckers, make sure you take them off as close to the trunk or the ground as you possible can.

This can be quite tricky to do with your secateurs If they’ve already grown very large. The one in the photo below is probably on the edge of what’s possible. You may need to get out the pruning saw, or even the chainsaw!

Fruit tree suckers tend to be persistent and come back every year anyway.

If you leave a stub, you’re just asking for trouble. This is effectively pruning it off with a heading cut (which we explain in this blog).

It’s pretty much guaranteed to branch. Don’t be surprised if you come back next year and find that one sucker has turned into a forest.

The third excellent reason to remove suckers is because they can be quite dangerous.

Many rootstocks are quite thorny. Because the suckers grow so vigorously, the thorns can quickly become quite strong and vicious.

Here’s one we prepared earlier.

There are a few reasons why they form major hazards in your garden.

The one we’ve photographed here had grown more than 2 metres tall in just one season. It had also grown right up through the tree. This not only takes much-needed vigour away from the tree but provides a potentially painful hazard when you’re picking.

Be very careful with how you dispose of suckers once you’ve cut them down. Make sure you put them well out of harm’s way.

Don’t leave them where they can be driven over. They can easily puncture even a tractor tyre (and yes, that’s the voice of experience!)

Particularly make sure you don’t leave them lying where someone might accidentally step on one.

Those thorns can be sharp and strong enough to penetrate most shoes, including sturdy work boots.

And you definitely don’t want to experience a puncture wound from them. These wounds can be as painful and problematic as severe insect stings.

It really can make a huge difference to your trees.