You can take the farmer off the farm… 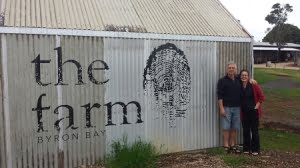 We’re taking a few days holiday off the farm. Well, when I say holiday, I mean working holiday. We try to get away at least once a year to do a review of the past season and plan for the year ahead. There’s two reasons we get off the farm to do it – one is to get away from the constant call of farm work, and the second is that while Hugh acknowledges the importance of strategic planning, he hates doing it only marginally less than having teeth pulled, so we’ve found that removing ourselves to a beautiful off-farm location softens the blow somewhat. (To put this in context and so we don’t sound like self-indulgent wastrels, we’ve been doing this for years and have had to choose some very low-budget options at times, including borrowing friends’ holiday houses, and staying in a caravan!)

Anyway, after a couple of days of good work, cabin fever threatened, so we decided to go exploring the gorgeous hills and valleys around Lismore, northern NSW. What a beautiful landscape! Inevitably the day turned into a busman’s holiday of visiting farms, dropping into farmers markets and talking to farmers, and I must admit we ended up suffering a little bit of climate envy while admiring the deep rich volcanic soils, lush semi-tropical vegetation and rainfall! Oh, the rainfall! Some places we visited get more than 3 METRES of rain a year. While this would pose its own challenges for disease control, it certainly put our 500 mm (if we’re lucky) annual rainfall into perspective, and made us more conscious of what an arid landscape we live in.

But the real revelation was the mid-week farmers markets we encountered. What an amazing farmers market culture exists around northern NSW and southern Queensland – most towns seem to have a weekly market, and there’s a farmers market somewhere in the region every day of the week except Monday. 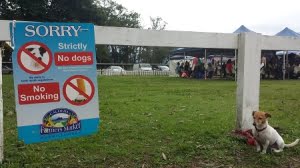 The mid-week farmers market at Murwillumbah – beautiful produce, and very strict rules about no dogs or smoking!

It really felt like a culture of shopping at the weekly farmers market is quickly becoming the norm in that part of the world, opening up lots of new opportunities for small and medium-sized farmers to take more control of their businesses by selling direct to their customers. It was all very inspirational, and great news in terms of my project. Part of my vision for the project is to work towards a culture of farmers markets being the normal and accessible way for people to shop, and after today’s tour, it’s not feeling like so much of a pipedream. 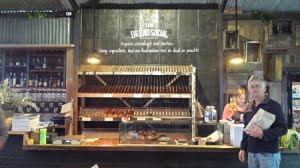 A delicious organic afternoon tea at an absolutely gorgeous farm shop just outside Byron Bay completed a very restful day off, left us feeling inspired and recharged our batteries.  Now, back to the strategic planning…

Since my last Blog I’ve: