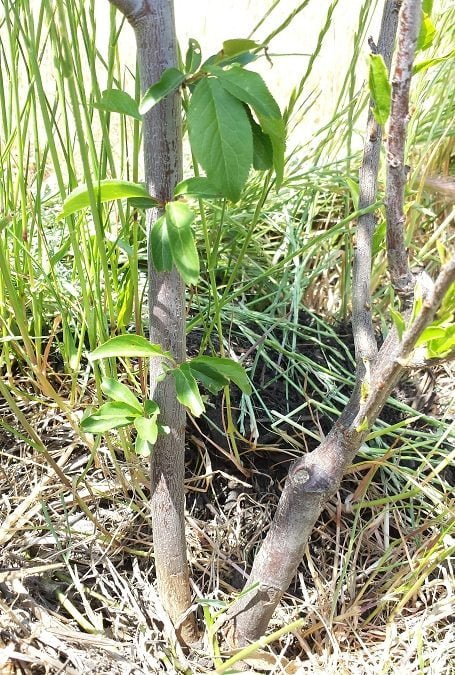 As the time for summer pruning of apricots and cherry trees comes to an end, we thought we’d share with you a tip about one of the most important jobs to do when pruning – regardless of the time of year you do it.

It’s really important to remove any suckers that are growing on your tree (that’s shoots coming up from below the graft union, or directly from the roots coming up through the soil).

Here’s the first reason why this is so important:

This is a little plum tree with two suckers coming up from the roots. Notice how they’re pretty much the same diameter as the original tree, and both are much taller?

Just imagine, for a minute, what this scenario would look like in another year, or two, if the suckers were left intact.

Within a very short space of time it would be increasingly difficult to tell which was the original grafted tree, and in fact there would be a good chance the original tree would be out-competed and die anyway. If you have a multi-trunked fruit tree in your garden, this is one of the common explanations for how it got there!

Here’s another example which shows just how much stronger suckers often are than the grafted tree:

That brings us to the second reason for getting this technique right.

When you’re removing suckers, make sure you take them off as close to the trunk or the ground as you possible can – if you leave a stub, you’re just asking for trouble because it’s likely to turn into a forest of suckers next year!

The third excellent reason to remove suckers is because they can be dangerous!

Many rootstocks are quite thorny, and because they grow so vigorously, the thorns can quickly become quite strong and vicious. Here’s a close-up to drive the point home…

The one we’ve photographed here had grown about 2 metres tall in just one season, right up through the middle of the tree, which not only takes much-needed vigour away from the tree, but provides a potentially painful hazard when you’re picking.

When you remove these thorny suckers, make sure you put them out of harm’s way, don’t leave them where they can be driven over because they can puncture even a tractor tyre (and yes, that’s the voice of experience!)

We’re all about making pruning as easy as possible, because we know it’s one of the topics that really befuddles a lot of fruit growers. Removing suckers is just one of the techniques we teach in our Pruning Mature Fruit Trees short course (as well as our other pruning courses), because it really can make a huge difference to your trees.