What do cankers on fruit trees have to do with fungal root rot? 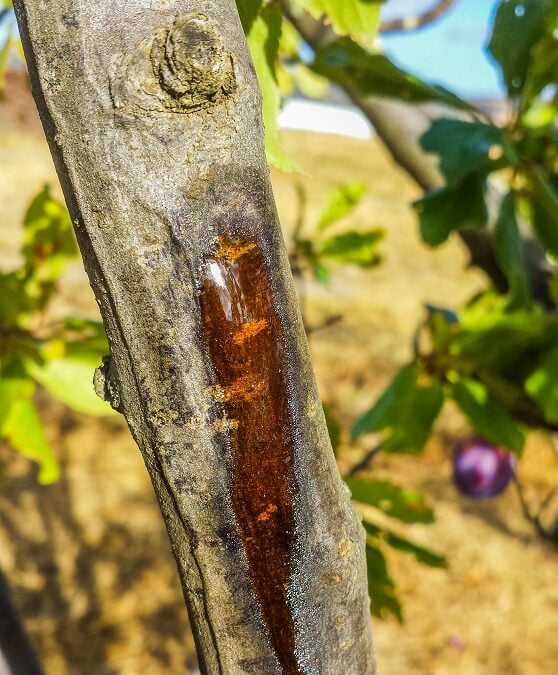 Cankers on your fruit tree are just one of the signs you may have Phytophthora or root rot disease. However, cankers can also be caused by many other diseases.

Well, the example in the fruit tree above of sap on the bark is pretty typical. The word is also used to describe “sores” in the bark of the tree. Cankers will often have both sap and damaged bark together.

What causes cankers on fruit trees?

It can be very tricky to pin down the cause of a canker.

Two of the most common causes in fruit trees are Phytophthora and Bacterial canker. The symptoms can look very similar.

Cankers can also be caused by diseases like Blossom blight, or even by physical damage.

There are a few giveaway signs that your fruit tree might be infected with Phytophthora:

Though Phytophthora attacks the roots, another symptom that can help identify it is dieback of branches. This may start at the top of the tree, or on any of the branches.

Is there any treatment for Phytophthora?

Phytophthora is responsible for many fruit tree deaths. But fear not, in many cases it’s perfectly beatable.

Of course, the answer is in the soil!

Phythopthora is a fungus that lives in water in the soil, so it thrives in wet and waterlogged conditions.

But guess what eats it?

Healthy, well-drained soil with lots of organic matter is the perfect breeding ground for these healthy soil fungi. Once established, they will out-compete the Phytophthora.

We learned a lot about this pervasive soil fungus after the flooding rains we had a few years back. A lot of trees died, but our soil improvement work helped us to save a lot of sick trees. We thought we would have to pull them out, but they recovered, as you can see in this photo below.

The key to beating Phytophthora is a healthy soil improvement regime. It should be based on (a) increasing the organic matter in the soil, and (b) making sure you have active (healthy) soil microbes doing their work.

Here’s some suggestions for what to use:

You’ll find more information about how to identify and treat Phytophthora (and other common fruit tree diseases) in our short course “Keep Your Fruit Trees Free from Disease“.