Capeweed and other weeds: love them or hate them? 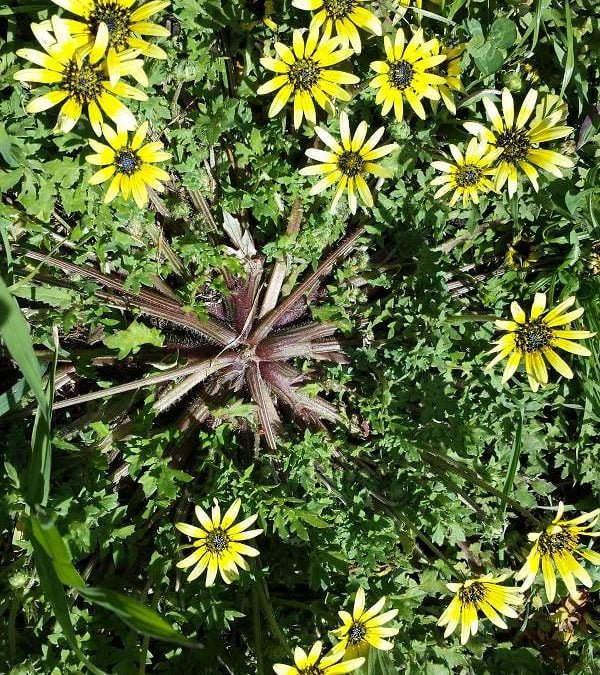 Do you know capeweed? It’s one of the weeds we’re often asked about at this time of year because it tends to grow in abundance in spring.

If you’ve been following us for a while, you’ll know we’re generally big fans of weeds. If you haven’t yet read Learn to Love Your Weeds we recommend it as a new way to think about weeds in your garden.

One of the characteristics of capeweed is that in some circumstances, you get a LOT of it, as you can see from the picture below.

Are weed monocultures a bad thing?

It’s all very well and good to appreciate the diversity of weeds under your fruit trees that may bring surprising benefits, but does the same thinking apply to a huge monoculture of one weed?

Capeweed germinates in autumn and winter, so is most evident in spring, dying off in summer. It’s basically a weed of cultivation, pastures, lawns, and disturbed areas. If the area has been really disturbed (e.g., over-grazed), that’s when you can end up with a large amount of the stuff.

That creates a problem right there. Wherever you have an over-abundance of capeweed, you end up with bare ground in summer when it dies off. This is a terrible thing for the soil.

Stock will eat it but often don’t really like it. The woolly seeds can cause impaction, it can taint milk, and where it’s the dominant feed, nitrate poisoning of stock is possible.

It sounds terrible, doesn’t it?

Finding something to love about every weed

But the problem is not the plant itself.

Capeweed has all sorts of great benefits. It can play a useful role in covering bare soil, keeping the earth cool, and attracting bees. If it’s present in your garden as part of a rich biodiversity of plants it can definitely fill a niche in the ecosystem.

The problem is the soil. Or to be more precise, the practices that have led to soil and diversity imbalances that result in a monoculture.

One of the most important advantages of a weed monoculture is that it’s sending you a message, loud and clear! You just need to pay attention and take notice.

A carpet of capeweed is a stark visual reminder that whatever you’ve been doing to the soil is all wrong. It may be an indicator of acid soil, compaction or waterlogging, or salinity.

It’s telling you to sit up, take notice and change your practices immediately.

You probably need to get more organic matter into the soil, re-establish a wide diversity of plants, and particularly focus on including plants that will stay green throughout summer.

The work of eminent Australian soil scientist Dr. Christine Jones (check out her masterclasses here) tells us that bare soil should be avoided at all costs. Incredibly, it can heat up to at least 60C in summer. This causes it to rapidly lose moisture, kill soil microbes, and contribute to climate change.

So while a monoculture of capeweed (or any plant) has its drawbacks, it also has advantages. It’s a fantastic indicator plant, a good bee attractor, and can be a very useful member of a healthy biodiverse garden or pasture.

But most importantly, it can make you a much better gardener!