Why are my apples brown inside? 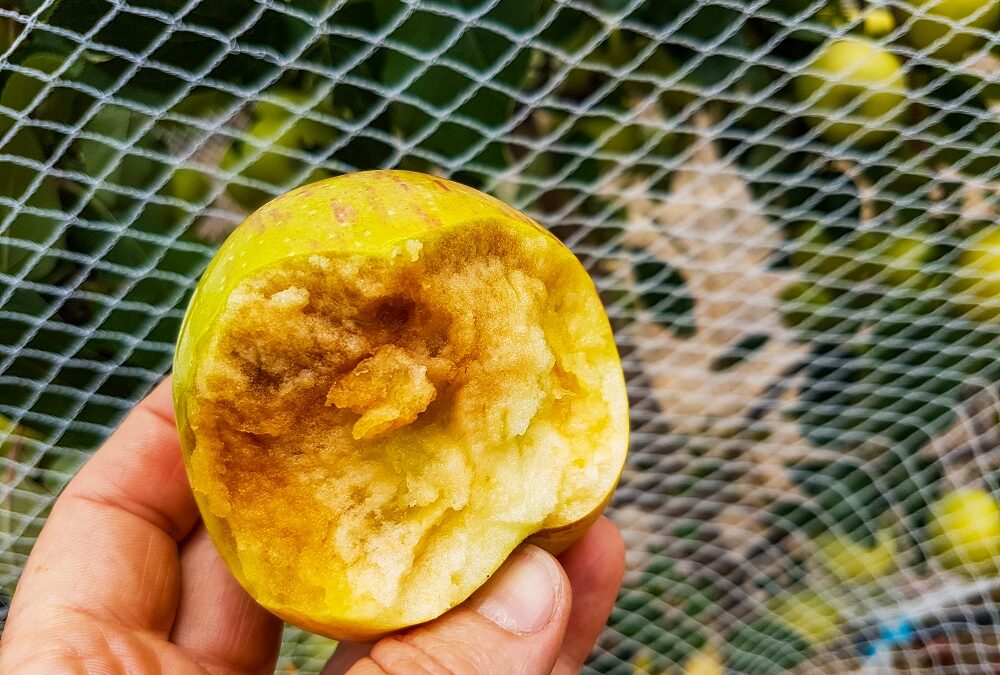 Have you ever gone to pick your beautiful apple crop and found they’ve turned brown on the inside?

We think apples are one of the best backyard trees, but internal browning is one of the problems they can have, and it’s pretty gross. When it’s this advanced, it makes the apples completely inedible.

It’s not that uncommon to see it in apples that are picked too ripe or that have been stored for too long. In fact, it’s a known potential problem when storing apples in long-term cold storage.

It’s more unusual (and a bit yuk) to see it in apples that haven’t yet ripened.

Why do apples that are still on the tree go brown inside?

When a heatwave happens at the wrong time is when you might find it inside an apple that’s still on the tree.

Gravenstein apples start to ripen in mid-summer in our district. Usually the picking starts when most of the fruit isn’t quite ripe yet. They’re just starting to colour up, and the seeds are just starting to go brown (an indicator of apple ripeness).

So imagine our massive disappointment when we went to pick some delicious new-season’s apples, and instead found quite a lot of apples on the ground and many of them browned off inside.

Any time this has happened, the most likely culprit has been a heat wave — something we seem to be getting more of here in central Victoria.

A lot of fruit can handle extreme temperatures reasonably well, though they may need some extra care and attention. It looks like Gravensteins are not one of them. This is possibly due to their European heritage and tendency to be a soft apple.

This is what they should look like in a good year…

Matching the variety to the climate

This variety has gone brown on the inside a number of times in past seasons. It’s making us question the wisdom of trying to grow apples that were bred hundreds of years ago in Europe in our very different climate here in Australia.

As our summers seem to be increasing in heat intensity, this may become an ongoing problem. Eventually, it might even make the variety unviable in this growing area.

However, if there’s one thing we’ve learned over recent years it’s that the climate is variable. It’s also quite likely that there will be future seasons when the Gravenstein shines, possibly in conditions that don’t suit other varieties.

That’s the key to the biodiversity plan that has led us to grow a big collection of varieties. It’s also one of the features of our Appreciate Apples short course.

For the moment at least, the beautiful Gravenstein will continue to hold it’s place in the crazy biodiverse mix in our orchards.