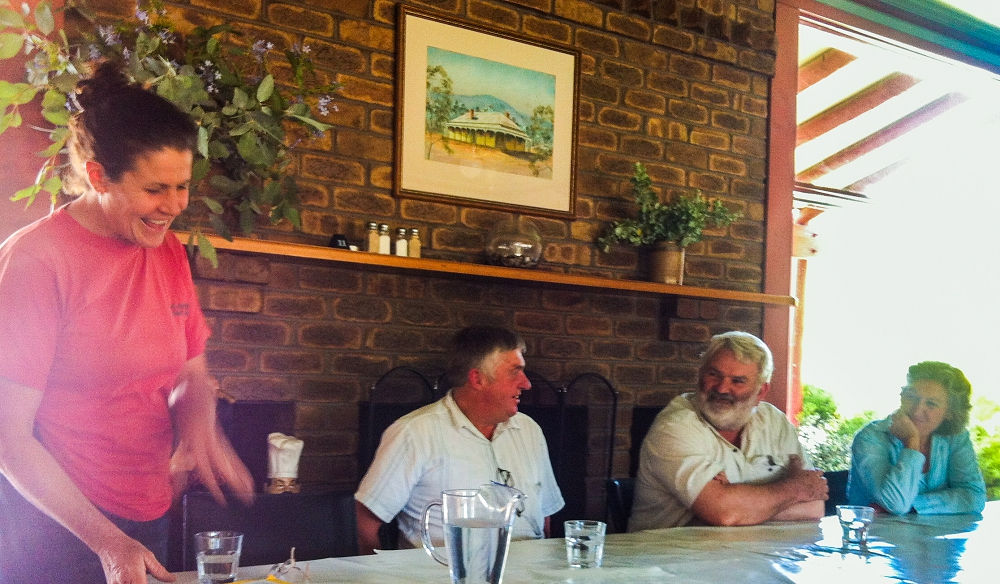 Hearing stories directly from farmers about what’s involved in growing food can be very illuminating, especially if you’re interested in self-sufficiency.

You’re probably interested in growing your own food, but maybe don’t have a lot of experience (yet!). Hearing the collective wisdom from farmers who have been doing it for years can shine a light on both the challenges and the highlights.

The Harcourt Applefest is the annual food festival in our town. It was the perfect setting to ask a panel of local farmers to share their stories at a “Meet the Farmers” forum. Farmers are often portrayed in the media either as ‘whinging’ or as heroes battling various disasters, but the reality is usually somewhere in between.

What’s really involved in growing food, and what can backyard growers learn from farmers?

Farmers from different sectors come together

Our district includes a wide diversity of mixed farming including horticulture, cropping, livestock, and dairy. The panel included three well-respected local farmers: a winemaker, and organic goat cheesemaker, and a large family orchard.

They were each asked to share their highlights and lowlights with the audience. We know first-hand how hard farming can be, and also how rewarding it is when everything goes well.

But beyond that, farmers often seem to feel a deep and unexplainable attachment to their land which keeps them going through the hard times. It was intriguing to hear each of them express those deeper feelings.

A typical day on the farm

All three were asked about a typical day on their farm in their busy season. Carla Meurs from Holy Goat Cheese went first. She left everyone feeling exhausted and in awe of the amount of work she and her partner Anne-Marie do during the kidding season.

Their day starts at 4.30 am with the first milking of the day. It proceeds through myriad jobs until the final checking of the new mums late at night. The next day, they get up and do it all again.

Ken Pollock from Blackjack Wines was next.

His day was also extremely full, though it didn’t start quite as early. Ken described the amount of detail involved in organising pickers and getting the grapes into the shed in good condition. Each variety must be picked at the optimal time, and the weather can often add extra pressure on getting crops off in a hurry.

At the same time, the neverending job of keeping an eye on numerous batches of fermenting wine doesn’t stop for harvest.

Rob Chaplin from Chaplin Orchards was the last of the farmers to share his experience of a typical day at the height of the season.

Rob described a demanding day involved keeping track of the thousand details that growers hold in their heads during the picking season. A lot of his time is taken up organising pickers and making sure they’re kept busy all day. He also has to make sure bins are in the right place at the right time.

The day finishes with ensuring all the picked fruit ends up in the coolstore by the end of the day, and that all the appropriate paperwork is done. Phew!

We’ve experienced no shortage of environmental disasters in our home town in recent years.

There have been floods…

the millennial drought, which lasted for 10 years …

How do goat dairy farmers deal with a drought?

It was fascinating hearing how each of the farmers has approached some of these challenges.

Carla’s main focus was on the reduced rainfall they experienced at the farm during the drought. Lack of pasture growth made it extremely hard to keep up a good feed supply for the goats.

Farming in a dry environment has led to innovations in planting alternative food crops for the goats. They’ve also worked on increasing biodiversity in the paddocks. Carla and Anne-Marie have worked hard to restore native pasture which is more resilient in extreme weather conditions.

The strategy has worked well for them so far. In the face of the increasing effects of climate change, it still has plenty of potential in future years.

Coming up with solutions

Rob spoke of the pain of losing apples to both hail and marauding birds. This situation prompted him and his brother Trevor to make a large investment in netting and equipment.

Ken’s biggest challenge has been the frustration of years of coping with the drought. This was followed immediately by the wettest year on record. These wildly varying weather conditions lead to a lot of issues with maintaining consistency and quality in the grape crop.

Another challenge in the wine (and fruit) industry is kangaroos. The horticultural districts in Harcourt are surrounded by bush which is home to hundreds of kangaroos. The kangaroos are attracted to the available water and plentiful feed on farm, and do significant damage to crops. Ken and his business partner Ian took the big decision to invest in kangaroo-exclusion fencing around their entire property.

Farmers express their passion for the land

The forum ended with each farmer explaining why they do what they do, and what they love about it. This is where the session (and the farmers) really came alive.

It was very special to hear them speak with absolute pride about their products. They each described a strong sense of belonging to their land.

Carla described the sounds, look, and feel of her farm on a crisp winter morning when she heads out from the house to the milking shed and her pleasure at being warmly greeted by the goats. It was absolutely beautiful.

For both Ken and Rob, knowing their wine is enjoyed by people around Australia is a source of tremendous pride. It constantly pushes them to do better, learn more, and achieve an even better result for their customers.

Farmers are often very sparing with their words. Sharing their feelings often doesn’t come easily. There is something very touching about hearing them struggle to find a way to express their feelings about farming.

But we’re so glad they did. Hearing a farmer put words to their feelings gives us a deep understanding of what motivates them, and it explains why they keep going in spite of the challenges.