From cherries to apples….

Our cherry block used to be one of our favourite places on the farm – 1,000 trees producing beautiful lush cherries, year after year. It was hugely popular with the pick-your-own crowds from Melbourne, and was generally a nice place to be. 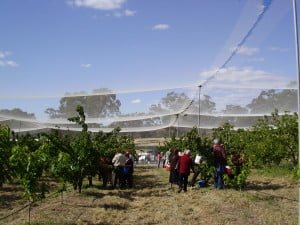 This all changed during the spring and summer of 2010/2011 when central Victoria received massive amounts of rain in October and December. Cherries hate wet roots, and even though the block is on a slope, the roots stayed wet enough for long enough to kill the entire block! 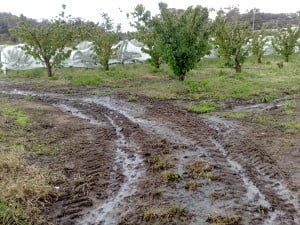 This left us not only with a dead cherry block, but we also had to decide what to do with the 1,000 dead trees. That’s always one of the challenges of farming – adapting to the unexpected. In the intervening years we have replanted the cherries elsewhere on the farm, and decided to replace what was the cherry block with a heritage apple orchard. This has been a long process, and so finally this winter we’re at the stage of pulling out the old cherry trees to make way for planting the new apples next winter.

So, how do you get rid of 1,000 dead trees? We could have brought in a bulldozer to push the into a couple of big piles for burning (the usual practice when getting rid of an orchard), but as the trees had been dead for 4 years they were very brittle and there would have just been a mass of  broken branches and sticks everywhere, which we would have been picking up for the next 10 years. So in the last few weeks we’ve chainsawed all the limbs and burnt them (they were too old and dry to chip), and will now push the stumps out one by one, and pile them up for burning. 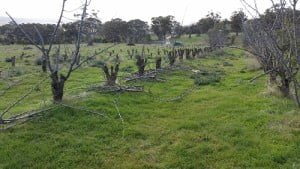 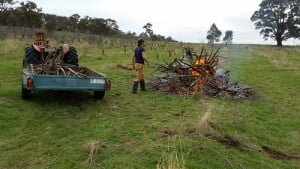 This will give us a nice clean block which we can work up in spring, plant a green manure crop to dig-in in autumn, and be ready to start planting on our new apple block next winter – phew! 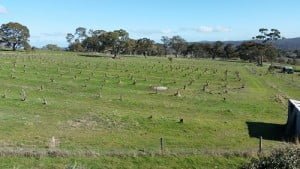