How to grow your own dwarf rootstocks 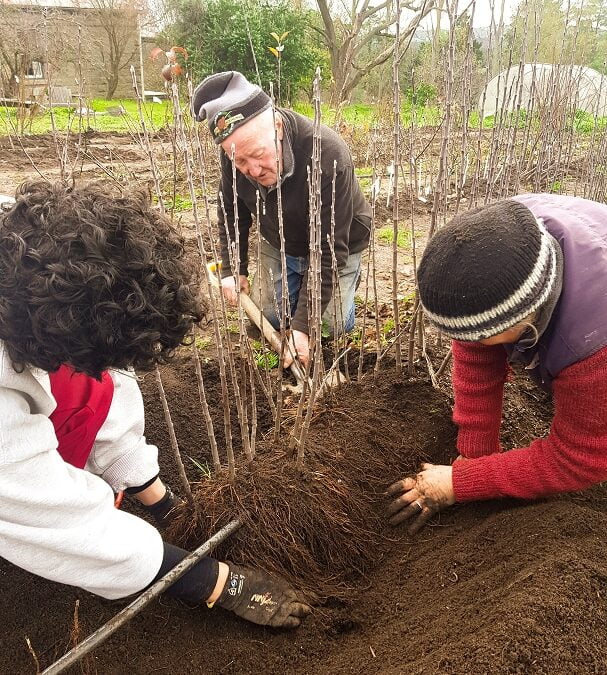 Have you ever wondered how to grow your own dwarf rootstock fruit rees?

Dwarf fruit trees are a great solution for lots of people. They’ll suit you well if you have limited space, don’t want to climb a ladder, or want the fruit to grow where you can reach it.

We talk here about how to graft your own fruit trees. But if you want to end up with a dwarf tree, the first job is to grow a dwarfing rootstock.

What exactly is a rootstock?

You probably know that most fruit trees are grafted. That means the bottom (roots) of the tree are a different variety from the top, which is also called the variety, scion, or cultivar.

The tree that forms the roots of your tree is called a rootstock. Sometimes they are grown from seed, and in this case, they’re called a seedling, which is usually a full-size tree.

Other rootstocks have been bred for particular characteristics, one of the most important ones being the size of the tree. Rootstocks might also be chosen because they’re vigorous, disease-resistant, or drought-resistant, for example.

That means that if you want to grow a dwarf rootstock, you can’t grow it from seed.

Back in August 2018, we started growing our own rootstock trees for Carr’s Organic Fruit Tree Nursery (our on-farm nursery).

We use a technique called a stool bed. This is a clever way of turning a single dwarf rootstock tree into many trees and doing it year after year.

It was a new technique for us, so it was a bit experimental at the beginning.

The first one we tried was a semi-dwarfing apple, and they worked fantastically well. We chose a variety called MM102, which grows to just over 50% the height of a full-size tree. It’s not too big and not too small – perfect for most people looking for a dwarf tree.

Getting started with your stoolbed

First, we had to buy the original 10 rootstocks from a specialised rootstock nursery. If you’re doing this at home you probably won’t need 10 trees to get started. In fact, one tree is ample, but you’ll still need to source it somewhere.

Look for a rootstock nursery in your state that will sell you a single tree (some nurseries will mail trees to you). Alternatively, you can take a root cutting from an existing dwarf tree to grow the first tree.

Once you have your rootstock tree, dig a trench that’s long enough to lay it down flat. The trench needs to be about 20cm deep.

Plant the tree at an acute angle at one end of the trench. The roots need to be buried, but you also need to be able to lay the tree flat in the trench.

Now gently peg the tree down so it’s lying flat along the bottom of the trench. If you can’t get it completely flat at the beginning, try again after a week or so.

During spring, shoots should start growing up from the horizontal surface of the tree in the bottom of the trench. Gradually surround the shoots with soil as they grow. First, you’ll fill the trench, and then continue to mound the soil above ground level as the shoots grow taller.

How many trees will grow from your stoolbed?

In our first experiment, we harvested more than 60 trees from the initial 10 we layered into the stoolbed trench.

As expected, that number went up for the first couple of years as the trees in the bottom of the trench became more established.

However, our early results were a bit mixed.

We also grow cherry rootstocks using the stoolbed technique. Cherries are notoriously hard to grow from either seed or cutting, so stoolbeds are the traditional way of growing them.

However, they are much more fickle than apples!

Potential problems with a cherry stoolbed

The first year we grew cherries in a stoolbed we started with 20 cherry Mazzard rootstock trees. Just like the apples, we harvested more than 60 trees. However, they were much less successful, particularly in the root department.

Cherry root development is much slower, which means you’re more likely to get mixed results.

Some trees that you harvest should have enough roots and grow well, but there’s a higher risk of growing trees with only a couple of roots, and possibly none at all!

Another problem with cherry stoolbeds is a tendency for the rootstock trees to grow over-large. These are the trees which tend to have fewer roots, suggesting they’re putting all their energy into growing above the soil rather than forming roots below the soil.

It also makes harvesting them extremely difficult. It’s important to cut them off as close to the parent tree as possible, so it may test your secateur expertise!