Why you should grow heritage and heirloom apples 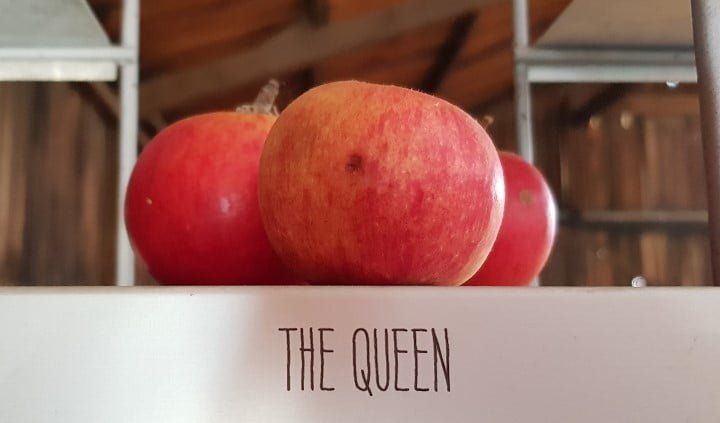 In 2016 we planted a new heritage apple orchard on the farm. The really exciting thing about the new orchard is the diversity of apples that we’ve planted. We’re aiming for around 100 varieties. At the moment there are about 46, with more going in each year.

So, why so many varieties? And why are we focusing on heirloom varieties that no one’s heard of, and hardly anyone grows?

Growing heritage varieties fits with our philosophy in a number of ways:

Our farm is also a community, so we want to thank a few important people who helped us get the heritage apple venture off the ground.

A huge thank you to the lovely Smith family, who enthusiastically jumped in and helped us plant the trees. Sue Smith was a huge supporter of our farm (and got her whole family involved) before she sadly passed away. We think of her often when we’re in the heritage apple orchard.

Keith Robertson, from the Creswick Garden Club
Keith has the most amazing collection of more than 700 apple varieties in his suburban backyard in Creswick. He was generous enough to let us follow him around for a wonderful day gathering scion wood to graft the heritage apple trees. We only had room to take a fraction of his collection, but he thoughtfully followed our brief that we wanted varieties that (a) he knew something about (whether they’re for eating, cider, or cooking) and (b) will extend our season by being earlier or later than existing varieties that we grow.

Merv Carr (Katie’s Dad)
Despite having theoretically retired many years ago, Merv is still the driving force behind our on-farm Carr’s Organic Fruit Tree Nursery (which is named in his honour).

The nursery grows several thousand trees each year which are sold to the public in winter. We treasure Merv’s involvement and the chance to learn his fabulous skills.

The word “heritage” is sometimes interchanged with “heirloom” (and occasionally “antique”), but what does it really mean?

Wikipedia states that an heirloom plant is “an old cultivar of a plant used for food that is grown and maintained by gardeners or farmers, particularly in isolated or ethnic minority communities of the Western world.”

That pretty much fits the bill, but it’s hard to find a firm definition of exactly how old an “old cultivar” has to be to qualify as an heirloom apple.

Without going too deep into the issue, we can probably agree that it refers to apples that can be traced back at least 50 to 100 years.

So, without further ado, here’s a list of some of the varieties in the heritage orchard. This is not an exhaustive list, as new varieties are being planted each year.

We don’t really know how many we’ll end up with, but we enjoy making a different range of heritage apples available each year in the nursery.