How to Grow Heritage and Heirloom Apples 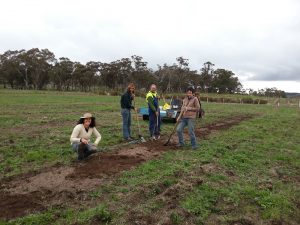 Finally, we’re ready to start planting our new apple orchard. It’s replacing the old cherry orchard, which died in the big floods of 2010/11 – you can read the sad story of how we lost 1,000 beautiful cherry trees here. 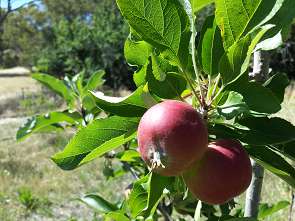 The really exciting thing about our new orchard (apart from getting a previously productive area of the farm back into production after a few years fallow), is the incredible diversity of more than 60 varieties that we’re planting.

Why so many varieties? Well it fits with our bigger farm and business strategy in a number of ways:

A farm is also a community, so we want to thank a few important people who have helped us get this new venture off the ground: 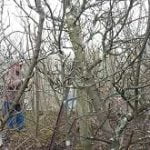 Keith in his amazing nursery garden

Keith Robertson, from the Creswick Garden Club
Keith has the most amazing collection of more than 700 apple varieties in his suburban backyard in Creswick. He was generous enough to allow us to follow him around for a wonderful day gathering scion wood to graft the trees we’re about to plant. We had to stop at 60, or Keith would cheerfully have given us all 700! However, he dutifully followed our brief that we wanted varieties that (a) he knew something about, e.g. whether they’re for eating, cider, cooking etc.; (b) will have some commercial appeal; and (c) extend our season – either by being earlier or later than existing varieties in our orchard. 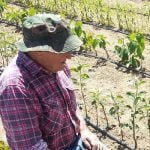 Merv at home in the tree nursery

Merv Carr (Katie’s Dad)
Despite having theoretically retired many years ago, Merv still manages the farm’s tree nursery, growing several thousand trees each year, including all the trees we plant in the orchard. Though they’re not certified organic, growing our own trees means that we can be confident they’ve been grown without any GMOs. We treasure Merv’s involvement and the chance to learn his fabulous skills. Plus, the fact that he grows all our trees for us saves us thousands of dollars every year!

So, are heritage and heirloom apples grown any differently to modern apples? Well it’s a funny thing (and a long story), but partly as a result of deciding to go down the road of preserving heirloom and heritage varieties, we’ve also decided to revert to a more old-fashioned way of growing as well, and in the process have ended up doing almost everything “wrong” according to modern orchard practice – but that’s a story for another day!

So, without further ado, here’s a list of some of the varieties we’ll have in the new orchard (this is not an exhaustive list, because despite our best intentions to stop at 60 we already have new varieties coming on in the tree nursery). We look forward to introducing you to them in about 3 years!