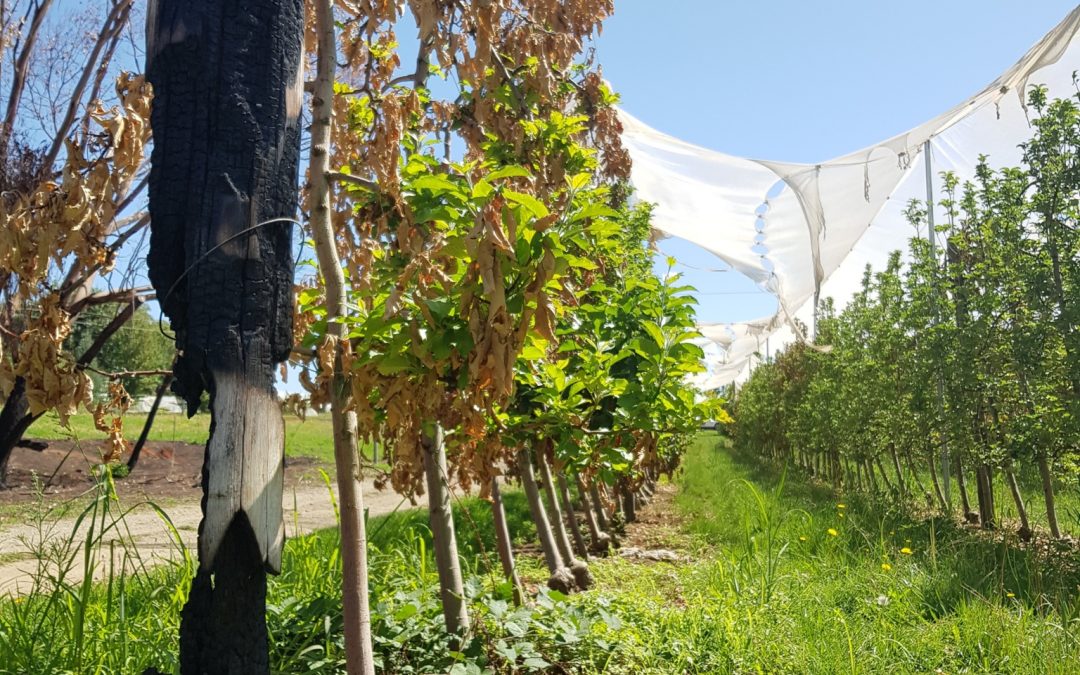 On a recent trip to visit one of our Grow Great Fruit members, we came home via Batlow in NSW, one of the many towns that was devastated in this summer’s bushfires.

We chose Batlow because it’s one of the most famous apple growing areas in Australia, and we’d long wanted to visit. We’d seen on the news that some of the orchards had been affected, so we thought we’d check it out for ourselves.

Driving into town from Tumut where we’d stayed the night before, we came over a rise to be greeted with burnt hills as far as the eye could see. A sobering view, to say the least.

Our trip was several weeks after the fire, and recent rain has seen a flush of growth, so the landscape was actually as green as it was black.

In fact the colours were quite stunning, with many of the blackened trunks now covered with a flush of pale olive green new leaves, burned leaves and bark a beautiful reddish brown colour, and a carpet of bright emerald grass underneath.

As we drove into town we became very quiet as we passed piles of burnt tin where houses had once stood, orchards with burned fruit trees and the remains of netting flapping limply in the breeze, and piles of chainsawed blackened stumps by the side of the road.

Like the rest of Australia (and the world) we watched on in horror this summer as the fires raged, simultaneously feeling awful for all the people affected, and thanking our lucky stars that (this time at least) we escaped the carnage.

After the fires we’ve been urged to visit fire-affected areas to bring economic stimulus back to towns and businesses, which is part of our reason for going there. But we also felt like it was important to actually go and see the landscape for ourselves, which is a completely different experience to watching something on the telly. Of course it’s nothing like actually experiencing a fire first-hand, but being there definitely made it easier for us to imagine what it must have been like.

As one of our aims was to spend some money in the town, as well as try to connect with how the fruit growing industry has been affected, we stopped at the first open roadside apple stall we found.

They also stocked a great range of cider, juices and vinegars, house-made ice-cream, and cakes and slices. Most importantly they had a coffee machine, so we loaded up with local produce, and ordered a coffee.

Wilgro orchardist Phil Wilson was making the coffee, so we introduced ourselves as fellow fruit growers, and asked him how he and others in the area had fared in the fires. He started by listing some of the things they’d lost or were seriously damaged:

They were evacuated before the fire hit, and Phil was glad they’d had enough notice to bring all their big mobile equipment—tractors, sprayers and the like—and park it on the road near the house, which saved it.

One of the worst things for Phil was that they weren’t allowed back in for a week, and it took another week to restore power, so the $70,000 worth of cherries that were picked and sitting in the coolroom went off and had to be dumped. Having been through devastating crop losses ourselves, we could definitely feel his pain!

Fixing the fence between Phil’s orchard and the neighbour’s property became the first priority, as next door’s cattle and sheep were in one of the orchards that hadn’t been burnt. Unfortunately (and understandably) the neighbor wasn’t so keen to help because it was the only feed available for them at the time! The stock ended up spending a couple of weeks in the orchard which did a lot of damage to the trees, particularly as the block had not long been grafted, and many of the new grafts were damaged. At least trees recover faster from being eaten than from being burnt!

Driving through the whole valley was the same story. Most orchards were burned along the edges. This might seem like a lucky escape, but in fact it is often devastating to infrastructure like irrigation systems (burning the end of each row of pipe makes the entire system inoperable) and netting (losing walls and poles compromises the whole net).

Orchard trees and netting are notoriously difficult (i.e, expensive) to insure. Phil and his family lost about half a million dollars worth of infrastructure, of which only about half was insured or insurable.

That’s a big financial hit to take. They’re grateful they’ve received the government grant of $75,000, which was key to getting the irrigation back up and running. But despite being featured in the videos shown at the recent Sydney bushfire fundraising concert, they haven’t seen any other grant money or heard anything about whether any will be forthcoming.

Not that they’re expecting a handout. There was no hint of a suggestion when talking to Phil that they expect anyone to “save” them. He and his wife are planning to work their way back to recovery.

“What else would we do?” he said. “I’m 70, there’s nothing else I want to do, the kids don’t want to come home and I completely understand that. We made sure we put them through uni so they wouldn’t have to farm if they didn’t want to.”

The further the conversation went the more he shared, even sharing their income for the last few years. It was a private conversation so we won’t share that with you, but suffice it to say it’s not enough to fund the restoration wok they need to do, and they’re looking at a long, long road ahead to recover.

Like many farmers (including us), most of their assets are tied up in the farm. It’s their super. It doesn’t leave a lot of choices but to keep going or sell up, which makes recovering from the fire—and at least getting back to where they were before the fires—imperative if they ever want to retire.

Trouble is, they were already both working 7 days a week, and now there’s a year’s worth of work just to get back to where they were before the fires.

Like Harcourt, the number of family farms in Batlow has been rapidly decreasing in the last few years—down from more than 50 farms through the local co-op a few years ago to just 7 now. According to Phil at least three will definitely close down now because of the fire.

What can you do?

We feel very privileged to have met Phil, had this conversation, and get a glimpse into how these fires have affected one of our farm families who are working their guts out to keep their farms alive, and keep feeding the nation!