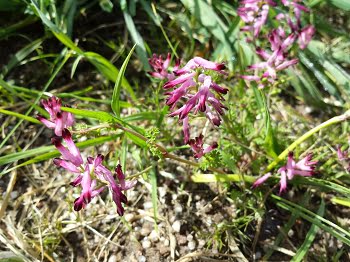 Its proper name is Fumaria officinalis, but fumitory is also known as earthsmoke, vapour, fumewort, wax dolls, beggary, nidor and kaphnos. It’s a herbaceous annual plant, found as a widespread weed in disturbed sites, bushland areas and gardens It is a common weed of arable land and a weed in gardens, usually on lighter soils, and is often found growing on old walls. It grows up to 50 cm high, and flowers in spring. It’s native to Europe, Africa and Asia, but has been introduced to north and South America, and Australia.

Read the article in Summer – Week 4