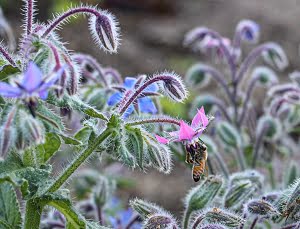 Also called starflower, bush bee, bee bread, burrage and bugloss, Borage is sometimes thought of as a weed because of its ability to self-seed very successfully, which means it has a propensity to pop up by itself in the garden. In fact it’s an incredibly useful herb, and an asset to any garden. It’s an annual plant, originally native to the Mediterranean region but now found naturalised around the world.

Read the article and recipes in Winter – Week 7