Have you heard of the “Tree of 40 Fruit” project? It’s an art project created by American artist Sam Van Aken, where he creates beautiful mega-multigrafted trees, for example a peach tree with more than 40 different varieties of peach and nectarine, for their aesthetic value. They are absolutely stunning (we can’t show you one here because we didn’t get permission to use his photos, but here’s the link to his website if you want to have a look). 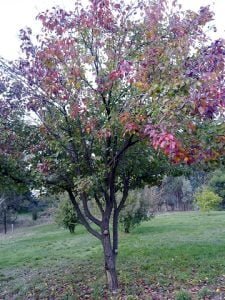 Instead, here’s a photo of a multigraft tree from a recent garden consultation we did, showing the different coloured leaves of the two different varieties on the same tree.

Not as spectacular as having 40 different varieties putting on their various autumn colours, but you get the idea! Here’s another one of a multigrafted cherry showing the different coloured blossoms in spring (this photo is from Wikimedia Commons).

A multigraft is, as the name suggests, a tree that has multiple varieties grafted onto a single rootstock. So for example an apple tree with Pink Lady, Granny Smith and Fuji all on the same tree (which coincidentally, is one of the trees we have for sale this year). Multigrafts are always the same type of fruit (e.g., all apples), whereas a tree with different types of fruit on the same rootstock –  say a plum, an apricot and a peach – is called a “fruit salad” tree and is quite a different animal.

The idea of a many-grafted fruit tree is not new – there are a couple of very famous examples around the world, such as this ‘family tree’ that has been grown by Paul Barnett in West Sussex, England, on which he’s grafted 250 different apple varieties (photo from the Daily Mail). 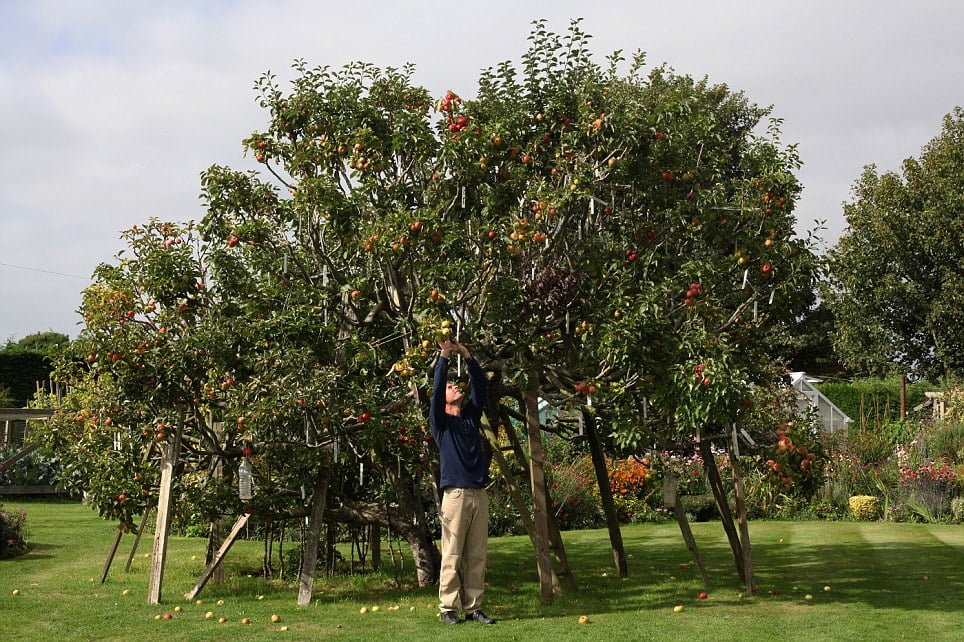 Multigrafting has been used not only as a repository of genetic material of lots of different varieties, but also as a mark of the skill of the master grafter, proving not only their grafting skills, but also their superior pruning and management skills in keeping each separate variety alive and growing, and keeping the whole tree in balance. 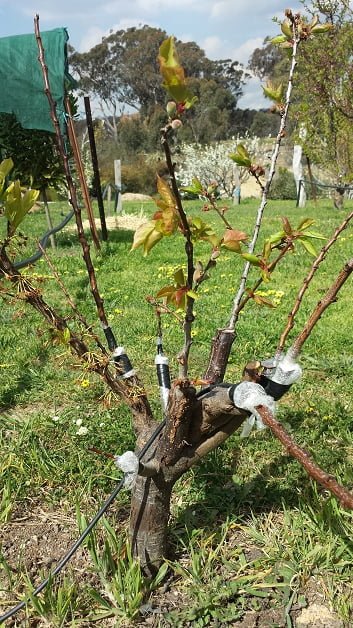 Which  brings us neatly to the question of, should you bother?, because while multigrafts have lots of advantages, they are almost always a harder tree to manage in the garden, if you’re trying to keep the different varieties in balance with each other, and they can be daunting for a new gardener in particular.

Sometimes keeping the tree in balance doesn’t matter, for example if you’ve grafted a piece of wood of the same fruit but a different variety to act as a cross-polliniser on to your tree because it wasn’t setting a good crop of fruit. In trees like that, you’re not aiming to grow both varieties in equal proportion.

But if you’ve planted a multigraft because (for example) you have limited space but still want roughly equal amounts of an early and a late apple, then for sure it matters – there’s not a lot of point of having a multigraft Gala and Pink Lady if you get 10 boxes of Gala early in the season (when you already have plenty of plums and peaches), and then have to wait until the end of the season when you pick 2 Pink Ladys from one weakling branch!

So, how do you manage them?

The trick is to pay a lot of attention to your pruning in the first few years of the tree’s life (which we call the ‘establishment phase’). Monitor closely how well the different varieties are growing, and you may need to prune the more dominant variety back quite hard at the beginning to let the weaker side get equally established.

Of course, one of the pruning principles is that the harder you prune, the harder your tree is likely to grow, so the tree’s most likely response to hard pruning is that the dominant side will respond with even more gusto. You can minimse this bounce-back effect by pruning the tree in late summer, rather than winter.

So is it worth it? Absolutely! If you’re interested in gardening and growing fruit, all of this is tremendous fun, both the grafting and pruning management. It can be a quick way to experience the age-old relationship between farmer and nature (“who’s in charge here?”), that often starts as a battle for new growers but can end with a much deeper understanding and respect for how nature works. And remember, the tussle goes on mostly in your mind – the tree will just keep being a tree.