Can you grow your own multigraft fruit tree? 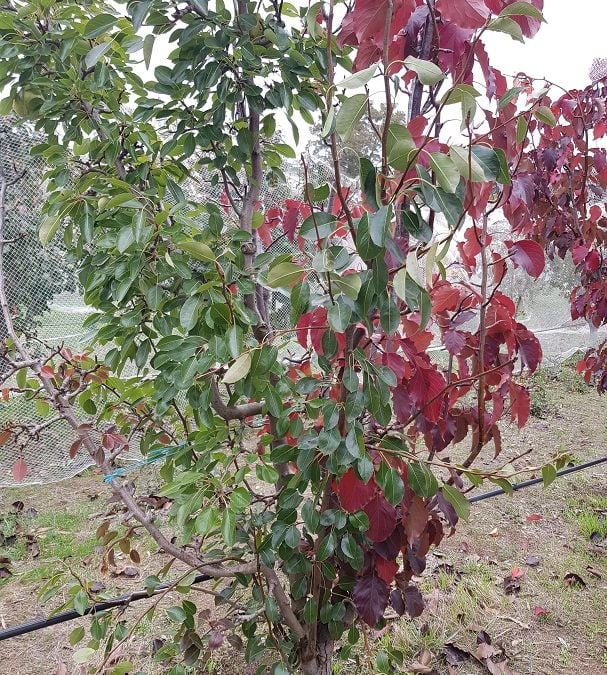 The trees above and below are great examples. Above is a multi-graft pear with both Packham (green leaves) and 20th Century Nashi (red leaves) on the same tree.

The one below is an apricot tree with both Katy and Trevatt apricot branches. Katy is an early apricot that is a bright orange colour, firm texture, slightly oblong shape and terrific flavour that combines sweetness and tartness. It’s also a reliable cropper.

Trevatt is a more common apricot that you may have heard of — it’s a heritage variety (dating from the 1900s, developed in Mildura), and is completely different to Katy. It ripens about a month later, it has pale lemony-orange skin, and is a super-sweet apricot with very little tartness. It also has a much different texture, ripens from the inside, and is much softer — it can even go a little mushy if allowed to get overripe.

So, will a multigraft suit you, and can you grow your own? The short answer is probably, and yes! They’re much less well-known, and many gardeners are a little hesitant to try them out.

It’s almost a no-brainer that a multigraft is a better use of the space in your garden, unless you have space for a LOT of fruit trees and would prefer to have whole trees of each variety. Considering that a mature tree can easily yield up to 40 or 50 kg of fruit (or more) in a good season, it usually makes sense to spread the harvest over a longer period, rather than have a massive glut to deal with all at once.

There’s a couple of other great reasons that multi-grafts can work well:

A fruit salad tree is like a multi-graft on steroids!

This extends the concept to include different types of fruit on the same tree, rather than just different varieties of the same type of fruit. In the example we’ve included here, you get both!

This tree has three varieties:

Angelinas ripen in January – so with just one tree you’ve already extended your harvest over three months, as well as given yourself a pretty good variety of fruit to enjoy and preserve.

We love creating multi-grafts in our on-farm nursery (called Carr’s Organic Fruit Tree Nursery), and expand the selection every year. (They’ve already sold out this year but there are plenty of other trees available here.)

Multigrafts can be very difficult to find (and often expensive) at nurseries, so are one of the best types of tree to have a go at grafting yourself – there’s heaps you can do in your own garden, by learning how to graft new varieties onto existing trees.

It’s such a brilliant and easy way to extend your fruit season and increase the variety of fruit in your diet that Grow Your Own Fruit Trees for Free is one of our favourite short courses, and probably the best one to start with if you’re new to grafting. We also have specialist courses on individual grafting techniques when you’re ready for them.

There can be a couple of drawbacks with multi-grafts though.

One of them is that the trees can come out of the nursery a slightly unusual shape (as you can see from the photo above), and so require a bit of careful management to establish as a useful ‘vase’ shaped tree.

The other main issue is that one variety may dominate the tree, and again, may need some attention when pruning to help keep the tree balanced. A handy tip is to plant the tree with the weakest branch pointing north, where it will be favoured by more sunlight.

But really, the management issues are usually handled easily during the regular “getting to know you” phase of your relationship with the tree, and once established, they usually settle down and crop beautifully.