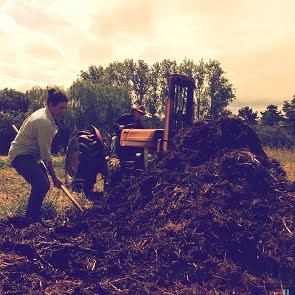 Making our own compost is time consuming (but great exercise!).

In the first post in this series  “How to become an organic farmer, part one…” we told you about the beginnings of our journey from being chemical farmers right through to becoming certified organic. Having just had our annual audit, we thought it was timely to fill in the backstory about why we think organic certification is the way to go. 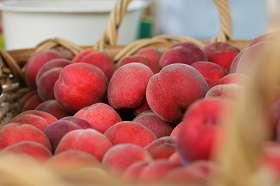 If you’ve ever been audited for anything, you’ll know it’s not always an easy process (read about it in this post “From the archives – our annual organic audit” ). We have to comply with all the relevant bits of the Australian Organic Standards, which for us is mostly about what inputs we’re allowed (and not allowed) to use. There’s a long list of prohibited inputs  – all the nasties we would never dream of using! Slightly more complicated is the fact that anything we do use must be on the approved list. We also have to submit an updated Organic Management Plan and farm map each year.

It sounds complex and stringent, doesn’t it? However, there’s really good reasons for all of it. Organic growing is based on building natural soil fertility, so we’re not allowed to use anything that might in any way destroy or interfere with the soil microbes that a natural system relies on. Chemicals and artificial fertilisers are the obvious culprits, but it goes right down to the detail of not using seaweed extract that is too high in nitrogen, for example, because it will mess with the natural balance of microbes.

Our produce is always labelled with our NASAA logo and certification number (whether we’re selling it at an accredited Farmers Market or at the wholesale market), as well as the name of each variety.

On top of that, we’re obviously not allowed to use anything that will harm human health, or harm the environment. But what a lot of people don’t realise is that the certified Organic Standards also dictate the ethics of every aspect of organic farming practices, which not only covers the obvious animal welfare considerations, but also things like where the liquid fish we use is from (it must be from a sustainable source).

And then there’s the paperwork. All our produce needs to be traceable from the consumer, back through the retailer, the wholesaler, our packing shed and right back to the orchard. So our auditor needs to see our harvest records, our sales records and our invoices. As part of the process they choose one of our products at random, and ask to see both harvest and complete sales records for that product. They’re making sure they match, because if we’re selling more than we’re growing, there’s a problem! 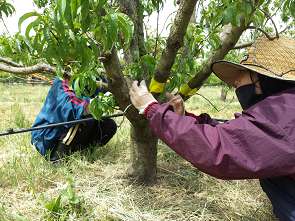 Putting double-sided sticky yellow tape around the base of each tree is time consuming, but a great way of preventing some pests (like earwigs) from damaging the fruit, without needing to use any insecticides.

Certified organic food is much more time consuming and expensive to produce, and customers are willing to pay that higher price for the guarantee that their food is safe, free of chemicals, and rich in nutrients. 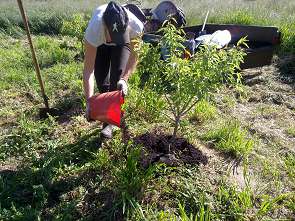 We put compost around each tree when we plant them, and then top it up again each year.

What a terrible breach of trust to be selling food containing pesticides, fungicides and other chemicals to unsuspecting customers – especially if they’re on an organic diet because they’re sick, immuno-compromised or have decided to feed their kids an organic diet. It’s hard enough to avoid chemical contamination of our bodies from environmental contamination without tricking people into eating the very chemicals they’re paying to avoid. 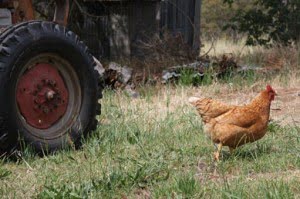 Chickens can be great warriors against pests in an orchard!

Certification is invasive and time-consuming, but this is how NASAA guards against unscrupulous operators buying chemically produced food, and reselling it (at a much higher premium) as organic. Does it happen? Well occasionally, yes! In 2007 there was a well-publicised case of an egg producer who was discovered (through the auditing process) to be buying cage eggs and reselling them as organic. They lost their organic certification and got a hefty fine!

More worrying is the side-of-the-road and market vendors selling produce that’s labelled ‘organic’, with no certification to back up their claim. They may be organic (or at least spray-free) but, as a consumer, you have absolutely no way of knowing, and they are probably not certified organic (or they would say so). (On a side note – this is one of the reasons we only go to VFMA-accredited farmers markets, because they don’t allow producers to claim organic status unless it is certified organic.)

Certification is not a perfect system, and has its critics, which has even led to an emerging brigade of self-styled  “beyond-organic” farmers (we’re not sure what the implication is there, but it seems to be that they simultaneously reject certified organic and claim their farming system is better). Again, they may well be following at least the minimum organic standards, but you just have to take their word for it.

One of the major criticisms of the certified organic process is that it’s possible to rort the system, and of course it is if you try hard enough (though, as we saw with the egg producer, it doesn’t always work and there are big penalties if you get caught). Critics also imply that a lot of organic producers practice “shallow organics”, where they do the absolute minimum to get certified organic status, without really developing the healthy soil culture that organic production relies on. 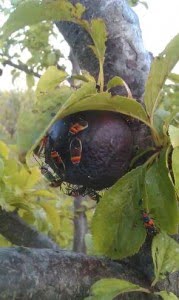 Organic growing is all about building healthy soil. Healthy trees growing in biologically active soil are much less likely to attract pests, so finding harlequin bugs on our plums is a trigger to pay more attention to improving our soil, rather than a trigger to use an insecticide!

These criticisms are no doubt valid to some extent, and we absolutely agree that the organic industry (and all the farmers within it) should always be striving to improve their practices and improve the certification system. But it’s also important to find the right balance between bureaucracy and letting people get on with things!

Tightening the system even further would put an ever bigger burden on organic producers, whilst farmers using chemicals are under no obligation to tell you which chemicals or GMOs (genetically modified organisms) are on or in their food as long as they are within the law regarding chemical use, residue limits, and withholding periods, and they also have to have a chemical users certificate, but who’s checking? We reckon it should be the other way around! Farmers who use chemicals should have to carry the burden of certification, and of telling the public exactly what they’re eating by labelling their product with every chemical they use. 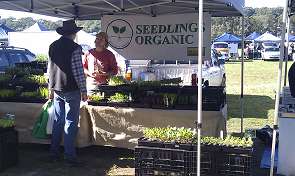 It’s not likely though is it, when such a system would rely on honesty and trust. No, the system we currently have is the most reliable way you currently have, as a consumer, to control the amount of chemicals that go into your body. And even though it can be pedantic, time-consuming and invasive…in fact, it’s really not a big deal for us any more. We know we’re doing the right thing, so as long as our paperwork is up to date (which sometimes happens the night before the audit…), there’s nothing to worry about and the whole certified organic process is not only simple, but quite affirming as well. 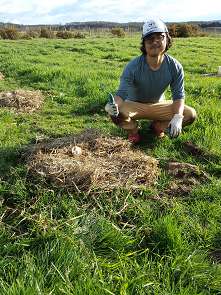 One of our wwoofers, Kan, putting mulch around young cherry trees. Chemical orchards kill the weeds around their trees with herbicide, which upsets the natural soil fertility. We use a variety of more time-consuming methods – like mulching and mowing – to control weeds.

So that’s why we stand firmly by the certified organic system, and proudly display our NASAA logo, because we reckon it’s the best security we can offer you! Next time you’re shopping and see a sign saying ‘organic’, ask the seller who they’re certified with!