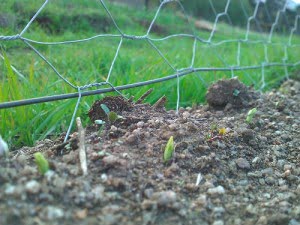 Have you ever seen black spots crawling all over your precious leafy greens? Particularly legumes with tender new shoots?  Did they have red legs? We’ve noticed these little creatures (red-legged earth mites) have taken a healthy liking to our peas…so much so that half the crop look shrivelled, brown, eaten down to the ground and deformed.

On doing research we found that nothing much deters the beasts. In fact, they love the cold, especially when its dry with no rain and capeweed.  Well that sucks, cause that’s exactly the kind of winter we’ve been having so far and one of our most abundant weeds! In an attempt to feel we were taking some kind of action other than squashing them (an impossible task with them numbered in their millions and they’re so tiny), we spoke nicely to them, shook some tendrils and even gave them some hose action hoping they would think it was rain…But to no avail, they refused to leave.  Their resilient natures are such that most things are ineffectual, even nasty chemicals. Time to whip out the big guns, no more nice Gung Hoe…
Nature cooperated and gave us 3 days of our first solid winter rain (late July?!) to help give them the boot and we backed it up by making a  witches brew full of wormwood, chilli, comfrey and compost tea. Surely enough to scare off the heftiest of vampires! Who knows what it’ll do, we might end up with Mexican mites in a mariachi band!, or chilli flavoured peas…wasabi even?! So with bated breath we sprayed it on each and every single pea…even the healthy ones, and we have a second dose ready. Hopefully our red-legged visitors might not appreciate such care to their existence and leave.
Our fingers are crossed, we’ll keep you posted…and if anyone has any other tips, let us know!
Cheers, Sas and Mel