In our funny white calender today is officially the beginning of summer! (Lots of cultures have way more than 4 seasons.) And I’m sitting here listening to dingoes howling (I live near the dingo farm) and waiting for the onslaught of the forecasted rain. I am not a weather reader, but I can be dubious about forecasts and try to take them seriously and with a grain of salt…if that’s even possible! We are meant to have lots of rain – a friend from Melbourne was saying that ‘the weather people’ were saying it was all of summer’s rain in one dump—eek! Here in central Victoria we don’t complain about the rain, except every few years when it floods, and then we think of our friends further north of the country and remember that we all have our own challenges. Mould, for example, and rotting is something we don’t struggle with a major lot here in Harcourt and Castlemaine! 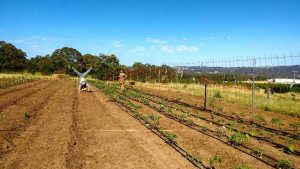 Farmers are always depicted as whinging about the weather and, speaking for myself, it’s something that is a continuous rollercoaster.  It’s one of the reasons farming could be seen as an extreme sport (but probably never will)—its risky, even when you’re perfectly prepared (but surely there’s no such thing—human error and chance can happen to the most dilligently prepared). 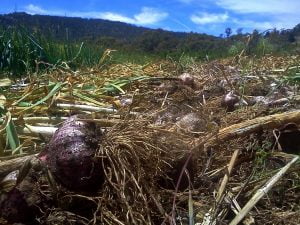 I feel like Sas and I have breathed some of that risk and disappointment these last few weeks. We left the garlic in probably 1 week too long, it was a joint, conscious decision as it was hot and dry—1 more week wouldn’t hurt and the pressing issue was the tomatoes, eggplants, chillies, and caps. The time was right and if we leave it too late we won’t get fruit until the frosts come back! As we are up-scaling this season, everything carries with it a little more risk because we are investing more into everything. If that sounds weird, just imagine you are planting your backyard full of plants plus the next 3 down the street. Not only are you increasing numbers, you’re increasing probability that some will get knocked down by roos, eaten by rabbits, snapped by cockies. Also you need to buy triple the amount of stakes, and irrigation and figure out storage space and make sure you give all the babies love, not just the ones directly out of your back door. But you haven’t increased your time, because you aren’t able to do that until you harvest your increased number of plants… Am I making sense? 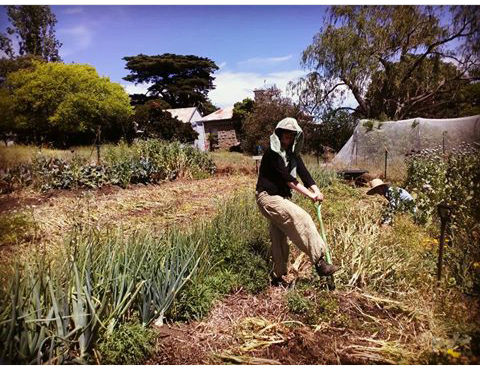 It’s all about scale.  The reason Sas and I have extended the patch is because we are aiming to find the right scale that works for us both financially and quality of life wise.
Ok – so back to our garlic pulling versus planting tomatoes choice. It was the right choice! We planted tomatoes and then the rains came a few weeks back. Perfect for newly planted seedlings that we are expecting a lot from this season. Not perfect for garlic that is already a wee bit overdue. Not to worry – we pulled them a few days after the rains in a hot week, they were beautiful! Massive thanks to Thea who not only helped plant the garlic back in April, she then harvested them with as full grown cloves too!
Because of the upsize (we actually did plant more garlic than last year because we skipped the Russian garlic this year), dry space with lots of air has been a bit tricky to find so the garlic can cure properly. Especially important once the garlic has begun to open inside their little cloves. Sas had the brainstorm of creating a hanging roof—brilliant! She silliconed the holes in the tin and we lay out the garlic we couldn’t fit elsewhere above our heads. Then it was hot and dry and some rain came that we didn’t foresee (this equals hot and steamy) and there’s nothing we could do but grit our teeth.  Upon bunching the garlic this week with our generous helpers — thanks Lydia, Elaine and Ingrid!! —we found that quite a few bulbs have been ruined.

Never fear, thanks to the quantity there’s still lots that will be good to go for xmas, it just feels a bit devastating when you’re in the space of growing more but you’re not equipped enough to deal with it. Probably a rookie error, probably also just what happens (and something that we as the new community of growers forming out here with the help of Katie and Hugh, are aiming to fix). Also garlic is a good, easy enough crop for us to grow out here in Harcourt. So I’m trying to not feel too ruined by it… and as I sit here listening to the rain on the roof gently falling I know it is good and that there ain’t much more I can do ‘cept breathe and be a good human to the earth and those around me, and keep trying my best at this thing called life.
Grow on and well,
Mel x