Out and proud – yes, I’m an organic farmer

The awesome organic debating team – Sheridan, me and Tony

Up until now, we’ve pretty much kept our heads down and mouths shut when it comes to talking about being organic fruit growers amongst our peers. Hugh and I are the only organic orchardists in the area, and while we’ve always had friendly relationships with our fellow fruit growers, it’s been based on the things we have in common, with our differences going uncommented on. The fact that we don’t use the chemicals and artificial fertilisers that the rest of our industry rely on (and therefore we clearly think they’re a pretty bad idea) is sort of the elephant in the room.

But then I was in the Apple and Pear Australia (APAL) magazine because I won the Victorian Rural Women’s Award. APAL were pleased the Award had gone to an apple grower, and I felt really proud to be on the cover of our main industry magazine. That was fine, I was interviewed by the delightful reporter and chattered away happily about our farm, including the fact that we’re organic.

But one thing led to another, and as a result of the magazine article I was asked to be a panel member on the Big Debate at the national Apple and Pear Convention. The topic was whether organic produce has more benefits than conventional produce. How wonderful, to have organics being debated at the national convention! Of course I had to jump at the chance to defend my precious organic industry, but I must admit, I had to think twice about it. Could I dare to expose my true colours in front of what I assumed would be a hostile crowd?

I met my team (Sheridan is a nutritionist who focuses on gut health, and Tony is a marketing professor who co-authored an organic report) and we went over our arguments, making sure we’d covered all the angles we wanted to talk about, wouldn’t contradict each other, and had thought of all the possible arguments our opposition would come up with to make sure we were ready with our rebuttals. Both my team members were lovely, and articulate, and I confessed to them my fears about speaking my mind in front of a room full of orchardists. “They’ll hate me.”

Don’t get me wrong – it’s not that I don’t have a strong belief in what we do on the farm. Or that I doubt the science. On the contrary – my science background stands me in excellent stead when it comes to understanding just how deeply agricultural chemicals have disrupted the system of natural fertility that has evolved over millions of years, and it’s science that has helped me understand how we as organic growers can start to fix it, and help the earth heal. 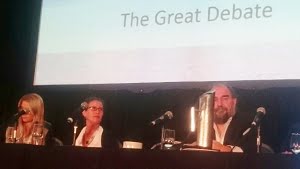 nervously waiting my turn to speak…

I don’t lack strength in my conviction. I was just extremely nervous about being the lone grower on stage defending those convictions. I feared the worst (what? being ridiculed? or humiliated?). To my shame, my voice shook (I really hope that stops happening with more public speaking experience!). And then a funny thing happened – someone on the other team said something so ridiculously wrong that I stopped being nervous and thinking about my own imminent demise, and became outraged. But – and this is the bit I’m quite proud of – I stayed very calm. When it was my turn to rebut I unemotionally and scientifically pointed out why he was wrong. From then on I was fine, and was able to answer questions with confidence.

So it’s out. I’m an organic farmer, and I’m proud of it. I even managed the ABC interview that followed the debate (which was later played on The Country Hour) with reasonable confidence, so now the strength of my convictions is on the national record!

Do you want to know the really interesting part though? The audience was not actually hostile at all. In fact, more than half of the audience questions were from people involved in the organics industry asking the opposition to justify their position in using chemicals – my fears had been not only inflated, but just plain wrong! Now I just need my subconscious to notice that just because I’m scared doesn’t mean anything bad is actually going to happen, and to remember that valuable lesson when I deliver a keynote address at the Connecting Rural Women’s conference in Beechworth in a couple of months!

Week 15. I’ve been working hard on my project:

My project, called “Growing Communities Around Farmers Markets”,  has been made possible by the RIRDC Rural Women’s Awards.