Organic farmers get thrown out of organic cafe! 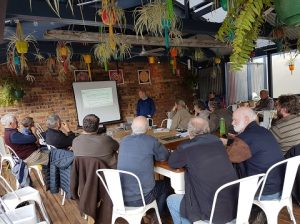 Yes, it’s true, this year’s Australian Network of Organic Orchardists (ANOO) conference (yep, all of us) was asked to leave the cafe where we were holding our meetings (you can see from the photo what a rowdy bunch we are) after the management decided we were taking up too much room!  It was much funnier and less dramatic than it sounds, and actually one of the least interesting thing that happened over the 2-day gathering. 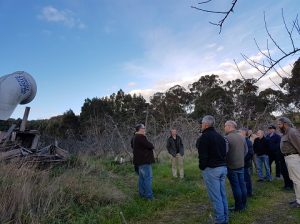 This was the third conference, and was held this year in the Adelaide Hills, where there are quite a few organic orchardists, mainly growing apples and cherries. The field trips are always a highlight of the conference – we always learn a lot through seeing other people’s orchards, asking questions and comparing notes. One of the biggest differences (in our eyes) is that they have vertical orchards (man, those hills are steep), but they’re completely used to it and don’t even seem to rate it as a challenge! 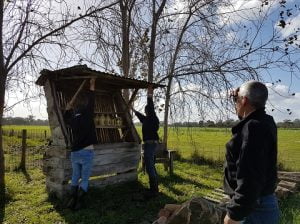 On the way over we stopped to visit Chris and Michelle at Kalangadoo Organics (you might have seen them last year on Gardening Australia), and had a fantastic tour of their property. They showed us how they’ve set up fencing to keep chickens in the orchards with their guard Maremmas, the clever farm-door sales stall they’ve built, and their fabulous arboretum, where they’ve been testing about 90 different apple varieties for black spot resistance for a number of years (we also brought home some wood from the most resistant varieties!). They’ve also leased some of their land to a young couple to start a market garden, so there’s a lot of similarities in our future plans as well; we had lots to talk about and they were very generous with their time.

ANOO has purposely been set up very informally with a completely flat structure, the organisation of each year’s conference shifting to a new area and person each year. Any certified orchardist is welcome, as long as they’re willing to share and participate. Most are apple growers, but quite a few also have stone fruit. Part of the conference is a round-table discussion about everyone’s season, their successes and failures, trials that have been implemented, new business ideas, and pest and disease management challenges. It’s probably the most valuable part of the event.

There was lots of interest in our organic farming alliance idea, with several other farms currently looking at or interested in similar ideas. It was surprising for example how many are either already using animals in their orchards or looking at doing it, like Matt and Coreen from Our Mates Farm who are experimenting with pigs, sheep and chickens in the orchard at their place in Geeveston (Tas.). The benefits for both health and fertility in the orchard, as well as providing extra income streams, seems to be clear, and it’s one of the things we’d love to see come out of our Harcourt Organic Farming Alliance. It was great that there was enough experience within the group to be able to discuss the relative merits of Shropshire sheep vs Wiltshire Horns, for example! 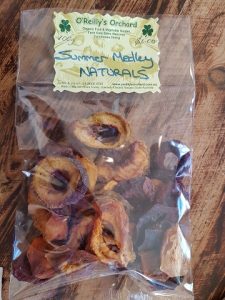 Value-adding was another hot topic of discussion, and again most orchards are already value-adding or planning to do so. David O’Reilly from O’Reilly’s Orchards brought some of his dried fruit medley and dried tomotoes along for people to try, and they were delicious! He struggles to keep up with demand, which highlighted another theme—that demand for organic produce keeps outstripping supply.

Other people are making everything from juice of various descriptions (both pasteurised and non-pasteurised) to cider, apple pies, pastries and frozen fruit. There was lots of discussion about equipment, techniques, markets, packaging and prices – an absolute goldmine of ideas!

As well as sharing the considerable wisdom and experience within the group, we also heard from a few speakers, including the guys from NASAA who tried to clarify the very confusing picture of organic standards in Australia for us! One of the chemical companies who service the organic industry came along to tell us about some new certified organic products, which led to some really interesting discussions among the group about “input” organics vs “true” organics, for want of a better way of describing it. Most ANOO members are small to medium-sized growers who share a deep understanding and appreciation of active soil biology as the basis for their healthy orchards;  we value our weeds and think of them as an integral part of our ecosystem, so it was kind of weird to hear about a new organic herbicide – we were all left wondering who it was aimed at… 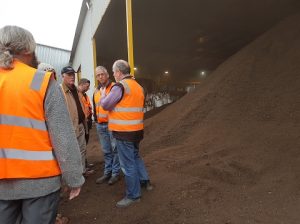 More in line with our philosophical approach to farming was the tour of the Neutrog factory, where they make a range of certified organic fertilisers from chicken waste. We were all impressed with the talk from their soil biologist which went beyond the basics of soil biology (which everyone was familiar with) deep into things like the regionality of different soil organisms. Even though certified organic fertilisers like this support biological farming, it still raised some interesting questions about the ethics of using waste products from factory-farmed chickens – so few decisions in farming are simple!

Another great joy was to spend time with Victoria, our intern from a couple of years ago, who lives in Adelaide. You may remember that since she was with us Victoria was diagnosed with and has been battling Lyme disease, and has had a pretty rough trot. She’s recently got onto a new treatment that seems to be making a real difference to her, so she was able to join us for a few sessions, where she immediately fitted right in, clearly demonstrating that she has the soul of a farmer! 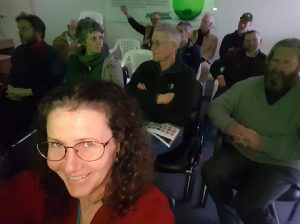 On the way home we were talking about the highlights and what we’d learned and it’s clear to us that the very best thing to come out of these gatherings is the gathering! Being part of a group, making new friends (especially friends who are as nerdy about fruit growing as us), and feeling like we’re not alone in this farming caper is absolute gold!