Do you know your life’s purpose?  It’s a big question for a workday morning, but interesting to ponder. I realised the other day that nearly everything I do in my work life is based around the same passion and interests, so I’m wondering..is this my life’s purpose?

The big realisation struck me this Monday when I helped to launch the Mount Alexander Local Produce Network (MALPN). It’s a new network for sustainable farmers in Mount Alexander Shire that grew out of the “Growing Local Food Economy Forum” that Council held waaaay back in 2012 (it takes a long time for these babies to gestate sometimes!).  The aim is to help connect farmers and others (e.g., retailers, restaurants, farmers markets, eaters – in fact anyone in the local food sector), to promote our rural sector, and to give local farmers a voice. It was a fantastic launch, and well attended, as you can see. 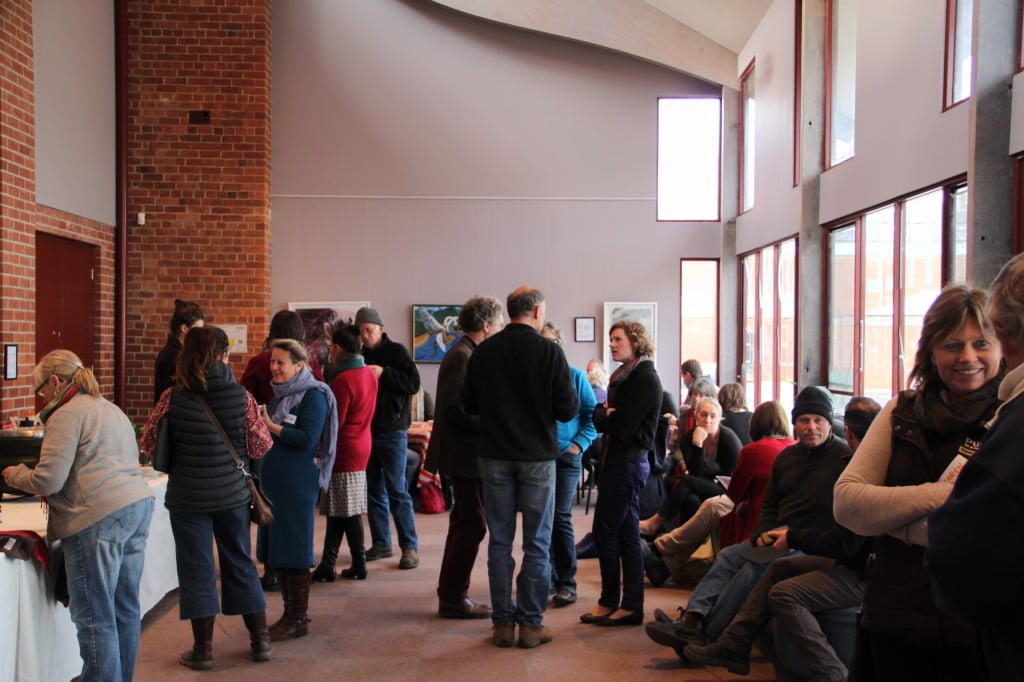 I was asked to give the launch speech in my role as RIRDC Victorian Rural Woman of the Year, and in it I touched on my Award Project, which is all about empowering small family farms to have more control over their marketing.

Which got me to thinking about the other projects in my life. Funnily enough, I find the three other projects I’m really passionate about at the moment are all very closely related! The first is creating new pathways to farming on our farm (e.g. our new collaboration with the Gung Hoe Growers, and getting involved in the Organic Federation of Australia’s new farm intern program), the second is being involved with The Growing Abundance Project and supporting the establishment of a practical organic food growing course, and the third is my work on the board of Melbourne Farmers Markets, where the focus is all about improving the local food system by creating secure and profitable markets for small and medium-sized farmers! I’m detecting a definite theme…

What really brought it all together in my head was realising that all the small and local projects I’m involved in, and in fact our little farm, are part of a much bigger global movement.  In reality, we have a pretty small farm with only 6,000 fruit trees, and it’s easy to feel like we’re not a significant player in agriculture, but I’ve recently come across a 2013 United Nations report called “Wake Up Before It’s Too Late“, which drew on scientific papers about environment, climate change and food systems from all around the world to conclude that

Then I discovered a heavily researched 2014 report from an organisation called GRAIN titled “Hungry for Land“, which reached the following conclusions:

1.  The vast majority of farms in the world today are small and getting smaller.
2.  Small farms are currently squeezed onto less than one-quarter of the world’s farmland.
3.  We are fast losing farms and farmers in many places, while big farms are getting bigger.
4.  Small farms continue to be the major food producers in the world.
5.  Small farms are overall more productive than big farms.
6.  Most small farmers are women.

Isn’t that mind boggling? Though small farms take up less than one-quarter of the farming land in the world, we produce most of the food! We small farmers, particularly women, ARE important! Small and medium-sized sustainable family farms play a significant role in helping to feed the world, and I’m pretty sure my life’s mission is to help empower them!

It’s pretty special to find myself doing (mostly) what I love, in work that feels useful and purposeful. I haven’t quite got here in the “textbook” way of first setting the goal, and then working towards it. I’ve followed the more haphazard path of just getting involved in things that are really interesting, working with other inspiring passionate people, and being open to opportunities as they come up.  I guess that’s the incredible power of knowing your life’s purpose!

Thanks to RIRDC for their valuable support of the Rural Women’s Awards.