How to grow apples – the wrong way!

Pretty much everything about our new heritage apple orchard is “wrong”— at least in the world of large-scale commercial apple growing. 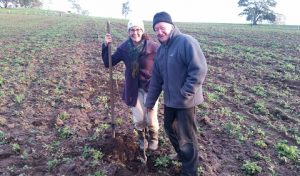 As usual, we’re straddling two worlds—the modern world of commercial horticulture that tends to be focused on high production, export, and monoculture; and the slower, more old-fashioned world of small-scale organic farming that aims to meet the needs of the people and the community who support our farm, is responsive to the climate, and empowers other people to become self-sufficient in food production.

So, what are we doing wrong?

How many varieties of apples can you name? Most people know Pink Ladies, Fuji, maybe Gala or Granny Smith, but for many, that’s as far as it goes—after that it’s “red apples” or “green apples”. If you can name 10 varieties you’re doing really well. 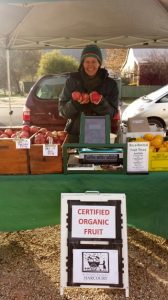 That’s largely because the number of varieties grown commercially (and therefore sold in supermarkets) has been steadily shrinking over the last few generations. And while there’s lots of research being done into new varieties, most will not end up in large-scale production, and it’s likely you’ll never hear of them.

Why has the number of varieties shrunk? As with every other area of food production, it’s a response to the commercialisation and globalisation of our food systems. For a variety to maintain its position on a supermarket shelf (and therefore on a modern farm) it has to meet certain criteria: it must be increasingly productive, withstand many months of cold storage with no loss of quality, have a long shelf life, be able to travel well, and be very consistent in appearance. And as farms get bigger and bigger, it’s just a lot more practical and cost-effective to grow 100 (or 1,000) hectares of the same variety. 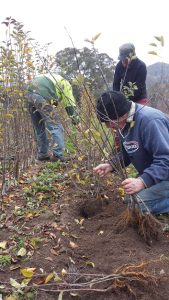 Sorting different varieties in the nursery

So, you might be surprised to hear that there are literally hundreds—and in fact thousands—of different apple varieties. When we were gathering the grafting wood to grow the trees for our new orchard, we had to make ourselves stop at 60 (it was VERY tempting to keep going). And we must admit, some of them were only included because they have such fantastic names—who could resist growing Geeveston Fanny or Peasgood Nonesuch? You can read the whole list here.

So, why are we swimming against the tide and planting exactly the opposite of a monoculture? 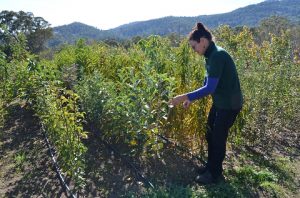 A huge diversity of different varieties in the tree nursery

If the wild weather conditions (drought, flood, hail…) we’ve experienced over the last 12–15 years have taught us anything, it’s that diversity is our best bet of bringing home a crop every single year, regardless of the weather conditions. The variability between different varieties in things such as timing of flowering, harvest times, and resistance to diseases all increase the chance that when something bad happens it won’t affect all varieties to the same degree, and therefore we have a bigger chance that at least some of our varieties will safely reach maturity each year. 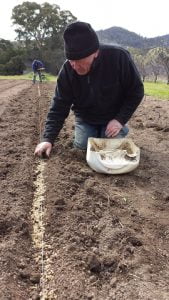 But not us! Nope, we’re planting our trees on seedling rootstock, which are trees grown straight from an apple seed, and are the biggest possible size an apple tree can become (in fact, this is what sets the benchmark standard of 100% that other rootstocks are measured against). In a modern orchard, this is crazy behaviour!

Seedling trees can get huge, which means they can be harder to prune, harder to thin, harder to pick, and pretty much everything has to be done up a ladder.

So, why are we apparently making life so much harder for ourselves? Well firstly, we’re pretty sure that by diligent pruning and careful management we can stop the trees from becoming too huge. 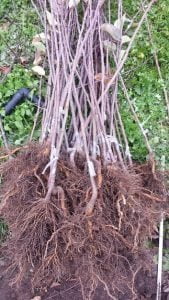 Seedling apple rootstocks being transplanted in the nursery, ready to graft

But the main reason is that we’ve just been through the worst drought in living memory, and with the climate variability that has so quickly become a way of life for farmers, we’re anticipating the next drought any time soon. And what we observed was that while trees on dwarfing rootstocks really struggled, most of the remaining few trees in our district that are on seedling rootstock—even the ones that had no irrigation—survived the drought. Wow, they are one tough tree, which makes them the perfect tree for the future climate we should be preparing ourselves for if we want to maintain food security.

3. Not fumigating our soil or killing the weeds

Standard practice in commercial orchards is to fumigate the soil before planting new trees. This is a process where chemicals are pumped into the soil to sterilise it, particularly to kill any root-eating nematodes or other pathogens that might have built up in the soil which would cause replant disease in the new trees. New trees are normally also “supported” by killing any weeds growing under them with herbicides to reduce competition for water and nutrients, and by the addition of various artificial fertilisers.

Nuh. Not us. We’re not doing any of those things. 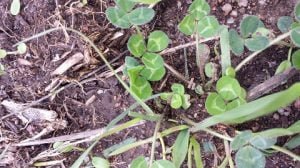 Don’t get us wrong, we also want to support our new trees as much as possible, reduce competition, and make sure we don’t get replant disease. We’re just going about it a completely different way, which inevitably is slower, more expensive, and more time consuming to put in place.

For a start, we’re relying on building healthy soil to make sure we don’t get replant disease. The best defense against root-eating nematodes is nematode-eating nematodes, so we inoculate the soil with them and make sure we provide the right soil conditions to keep them happy.

Second, we work consistently to build a strong natural fertility system to make sure the soil contains all the macro and micro nutrients that the trees will need, and that we have plenty of bacteria and fungi present to transform them into a plant-available form. 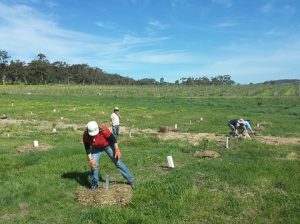 Third, we reduce competition from weeds by mulching our trees for the first couple of years and, as the mulch breaks down, encouraging a wide biodiversity of plants to grow under the trees, thereby providing a multitude of benefits, from taking nitrogen from the air and putting it into the soil to providing habitat for beneficial predator insects.

Just because we lean towards the “old” way of doing things doesn’t mean we’re not interested in being as modern, efficient, and productive as possible. In our new block we’ll be participating in some ground-breaking research to test different types of mulch and different types of groundcover to see which system can achieve the best results as quickly and cheaply as possible.

We actually believe that by doing all these things “wrong” we’ll be able to demonstrate in the long run how much more sustainable, ecologically viable, and less reliant on artificial inputs our organic orchard will be. 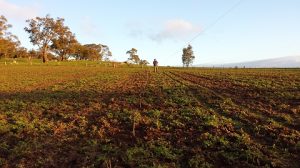