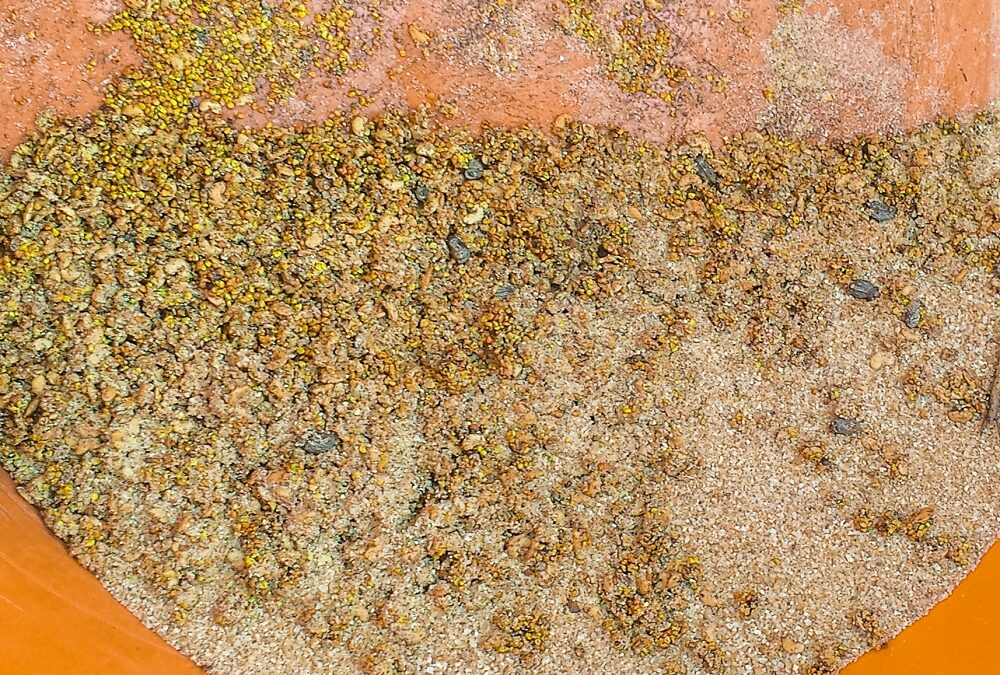 We talk about diverse green manures and how important they are for the soil all the time. It’s one of the techniques we use all the time in our on-farm nursery.

Our nursery is made up of four different blocks. Once we’ve harvested a crop of trees from any given block, it’s allowed to lie fallow (unused) for a couple of years before we rotate back to the same block.

While it’s fallow, we plant a green manure crop in the block. This restores soil fertility, replenishes the soil, and replaces the organic matter we’ve removed by growing and harvesting hundreds of fruit trees.

The science behind diverse green manures

We’ve followed the work of soil scientist Dr. Christine Jones for many years, because she’s amazing!

One of the things we’ve learned from her and found absolutely fascinating is the importance of multi-species groundcovers. In fact, after hearing this masterclass, we were inspired to ramp up our green manure seed mix.

Dr Jones explains that prior to European invasion, “the natural grasslands that once covered vast tracts of the Australian, North American, South American and sub-Saharan African continents – plus the ‘meadows’ of Europe – contained several hundred different kinds of grasses and forbs.”

A multi-species crop is an entire community of plants working together to convert sunlight into liquid carbon. Remember learning about photosynthesis at school? The liquid carbon from the plants then feed the microbes in the soil.

It’s called the plant-microbe bridge. It builds soil by converting carbon from the air into stable compounds in the soil. It also helps soil to hold far more water.

How we’ve increased the diversity in our green manures

We’ve always used a fairly diverse mix of seeds for the green manure, but these days we go nuts.

We’ve also been influenced by Dr. Jones to make a couple of other modifications to how we prepare the seed. We mix in a good dose of worm castings out of our worm farm, and we soak the seeds for a couple of hours in raw whey, sourced (of course) from our on-farm dairy, Sellar Farmhouse Creamery.

These are both great sources of microbial innoculation to help the seeds get the best possible germination rate. If you have access to them, why not use both?

Soaking the seeds can leave the seed mix pretty wet, so we mix in enough dry sand to make it spreadable.

So, feeling inspired, we set out to create our own multi-species crop. We didn’t quite get to 100 species, but we managed 40:

The logistics of planting a green manure

The logistics of getting the seed into the ground can be daunting, so we’ll share how we do it in the nursery.

We’re lucky enough to have access to equipment. First up, Hugh uses the disc plough to turn in any weeds that are already growing. You can see the result in the next photo.

Those weeds were in effect the first green manure crop, which we’re now following up with a more diverse plant mix that will hopefully stay green over summer.

We’re always wary about using equipment like discs, harrows, or rotary hoes because of the way they smash up the soil and can damage microbes, particularly soil fungi.

But you’ve also got to find a way of getting the seed into the soil. Christine Jones is very much of the opinion that it’s worth disrupting the soil (albeit as minimally and infrequently as possible) to get diverse, perennial groundcover crops established. The benefit should quickly outweigh the initial cost.

The disc does a good job of turning most of the weeds in. However, the surface is still too rough for the seeds to connect with the soil well enough.

Next, we put on the rotary hoe.

You can see the difference just one pass with the rotary hoe makes (on the left hand side of the photo above). It’s still not a super smooth seedbed, but it’s good enough for the seeds to hit the soil when they’re broadcast, rather than getting stuck on a clump of grass – where they definitely wouldn’t germinate and grow!

If we had seed-drilling equipment that could inject the seed straight into the soil we could bypass this step. Many innovative regenerative farmers are sowing seeds directly into pasture these days, and getting excellent results. It means there’s no soil disturbance or loss of ground cover at all.

But needs must, so at our place, the next step is broadcasting the seed by hand. It’s always a challenge to scatter the seed evenly over a patch this size, but by dividing the patch into sections and weighing out portions of the seed mix we get a pretty even spread.

The last step is raking the whole patch to get a light cover of soil over the seeds. Finally, the whole area is watered in.

If you’d like to find out more about how to quickly build fertile soil at your place using green manures, we’ve packed a lot more detail into this short course.