Getting Up Close and Personal

We need to put in a little disclaimer right at the start—don’t expect anything too professional, we’re definitely better farmers than we are videographers, and this first video is a bit ropey, especially the sound. We didn’t realise what a difference a bit of wind would make and it sounds like there’s a jet engine firing up in the background, but we’ll get that sorted before we do the next one!

So, why are we putting ourselves through the mild torture of videoing ourselves regularly when we could be quietly going about the business of growing organic fruit?

Because even though we’ve been teaching organic fruit growing for a few years now, we got a sharp reminder last week about how many people out there are still not aware of why it’s so important that as many people as possible learn how to nurture the soil and grow their own food.

It’s easy for us to get complacent because we’re often surrounded by people who ‘get’ that our food system is under serious pressure, so we were pretty shocked and saddened when we attended a function recently where one of the drawcards was the ‘sustainable’ food supplied for morning tea—every item was imported, out of season, or highly processed! And there was no organic produce at all! What was worse was that the organisers knew they had organic growers present and made a point of letting us know they’d put some thought into the food. Their version of ‘sustainable’ was to include some fruit and a couple of salads alongside the highly processed deep-fried offerings.

We could have wept…

But, instead, we went back to the drawing board and thought about what else we can do to help to get the message out there about the many, many benefits that come from growing at least a small portion of your own food organically, as well as sourcing food that has been grown in a regenerative farming system. People need to understand that these simple choices are incredibly powerful, and can make a real difference to your health and well-being, your family budget, and the health of the planet. And we decided we need to do it in a way that’s easy for people to access, free, and not too hard for us to produce. Hence, Facebook Live!

We’re probably also influenced by a dinner we had recently with some close friends who told us—almost in passing—that they’ve decided to pull out their fruit trees because they’re sick of putting in all the work of looking after the trees and not getting any fruit year after year, and why should they bother any more when they can just buy beautiful organic fruit from us?

Well, we were honoured, but also deeply saddened. These guys are great gardeners, take a lot of pride in it, and produce almost enough vegies to feed their family all year. But they were giving up on their fruit trees. They’d never joined any of our teaching programs because they didn’t want to muddy the waters of our friendship, they hadn’t wanted to impose on the friendship by asking for free advice, and we hadn’t wanted to offer unsolicited advice either. But we know they’re “that close” to getting a great crop from their fruit trees, there’s just small gaps in their knowledge that mean they’ve been missing a few small crucial jobs each year that have made the difference between success and failure. 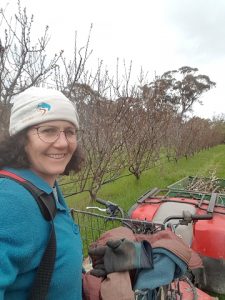 So, we’re making it personal! We’ve realised we need to step it up a notch and provide a heap more information that touches people in a different way to get our message out there more effectively. We want to bring people onto the farm (without actually bringing them all onto the farm…) so you can see for yourself in real time what’s involved with producing your food, and that with the right guidance it’s really not that hard!

Look out for us in coming weeks and months—you’ll be seeing our faces a bit more often from now on (and please don’t judge us on our lack of video skills!). 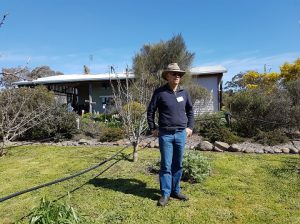