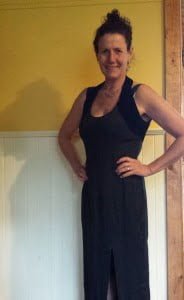 We’re off to Canberra next week, and we’ll be all frocked up and ready to meet politicians of every persuasion at the Gala Dinner at Parliament House on Wednesday night. Hugh’s collected his tuxedo, I’ve bought new heels and have the evening dress in train…now I just have to sort out a new lipstick, and we’re all set!

Why so much glamour and glitz? It’s the announcement of the national winner of the 2015 Rural Women’s Awards, and as the Victorian state winner, I’m in the running! I’ve met all the other state finalists when RIRDC sent us all to Canberra recently to do the Company Director’s Course (as part of our award prize), and so I can confidently tell you that this year’s national award is in safe hands whoever wins. What a fabulous bunch of women! All leaders in their communities, running exciting projects and achieving great things in their careers, while at the same time being the most down-to-earth, ordinary bunch of school mums you’d ever find yourself working next to in the school canteen.

We’ve decided amongst ourselves (the other RIRDC state finalists that is, not Hugh and I) that it would be in RIRDC’s best interests to just split the award between all 7 of us, because there’s nothing to pick between us and we’d all make fabulous ambassadors for them over the next 12 months. Of course, awards being what they are that’s not going to happen, but it is great to genuinely feel that I’ll be equally delighted whoever wins.

This year has been so full of engagements since winning the Victorian award in March that I feel like I’ve got a pretty good sense of how exciting it will be if I should be so lucky as to win the national and, on the other hand, I’m aware now of how much time it takes to do a good job and get the most out of every opportunity, so I also think I’ll be perfectly happy just looking forward to a normally full year crowded with farm life and existing projects if I don’t win!

So think of us on Wednesday (and keep your fingers crossed for me that I don’t trip over my unaccustomed high heels in public and make a complete dill of myself) and we’ll let you know what happens!