Hands up – who loves Bramley apples? 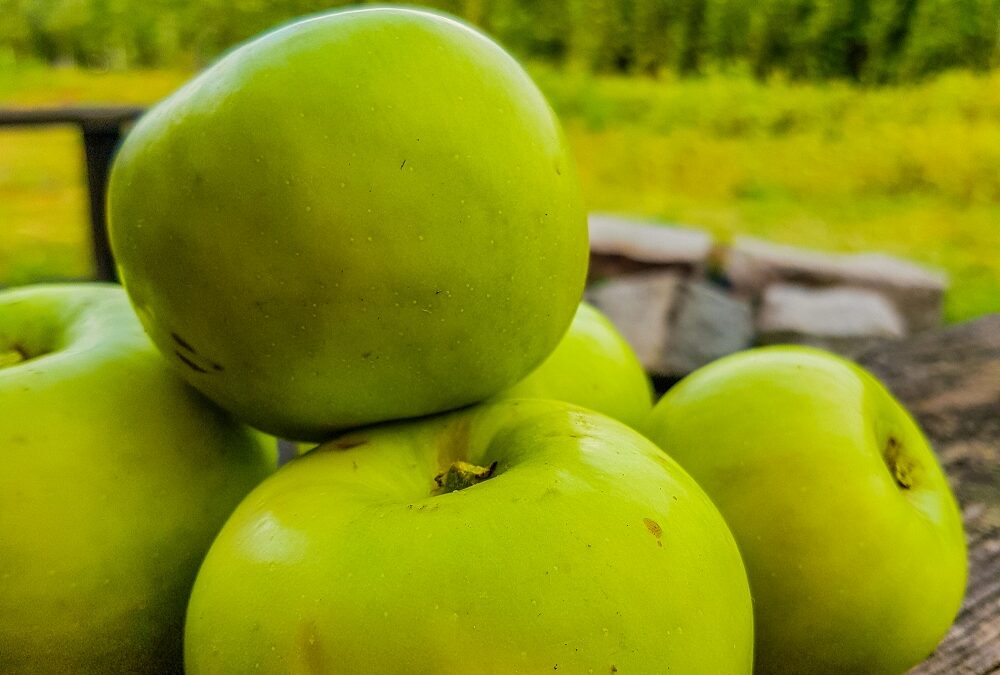 Here’s a wild guess. If you’ve got your hand up because you love a Bramley apple, you’re either from the UK or have close links to someone from the UK.

Or maybe, you’re from somewhere else altogether, and you’ve learned to love Bramleys for their own sake. Either way, Bramley apples have a large – and very dedicated – following!

What makes Bramley apples so special?

Properly called Bramley’s Seedling, they are definitely one of the most popular apples with Brits. They just go mad for them!

It’s the variety we get the most inquiries about, presumably because they’re been a relatively common apple in England for a very long time.

(And yes, we do grow the trees, but if you want one we recommend you get your order in early because they usually sell out.)

To Aussies like us, brought up thinking that Granny Smith was the ultimate cooking apple, it was initially hard to see what all the fuss is about.

But we have to admit, now that we know them and have got into the habit of using them as a cooker we can definitely see the attraction.

Where do Bramley apples come from?

Bramleys have a most romantic history.

The mother of all Bramley trees was planted as a seed by a woman called Mary Ann Brailsford in Southwell, Nottinghamshire, at the start of the nineteenth century.

That gives these apples a fairly impressive pedigree. They have the right to be called a ‘heritage’ apple (though they still don’t compete with Snow apples, which are known to have originated in France in the 1600’s).

Anyway, the name Bramley came from the man that inherited that first tree (rather than the woman who planted it – typical!).

According to The Apple Source Book, that tree is still alive today. Despite having fallen over numerous times in the last 200 years, it can still pick up to a ton of fruit each year!

Everything you need to know about growing Bramleys

Bramleys are as easy to grow as any other apple. One of their main features is that they are triploid, which means they need to be planted with two pollinators.

Triploid varieties produce sterile pollen, which won’t pollinate other varieties. Triploids are therefore usually planted with two other varieties that flower at the same time. The other two will then fertilise each other as well as the triploid.

Despite this disadvantage, triploids have several advantages over the more common diploids. They produce large vigorous trees and have large fruit. They also have good natural disease resistance and are quite resilient in difficult conditions.

That’s why Bramley apples have adapted so well to Australian conditions.

Because we’re certified organic and don’t use any pesticides or chemicals, we’ve always tried to plant varieties that have a higher natural resistance to pests and diseases. The Bramley grows a strong healthy tree that’s quite resistant to black spot fungal disease (also called apple scab).

What to plant with your Bramley

If you’re planning to plant a Bramley, you need to plant other varieties that flower at about the same time.

Why Bramleys are best for cooking

When ripe, Bramleys have greenish-yellow skin with a red flush and stripes. The flesh is firm and yellowish and is very acid.

This is one of the characteristics that makes it prized as a cooking apple. The other is the fact that when cooked, Bramleys collapse into a mush of delicious apple-ness, making them perfect for fluffy apple pies.

Though Bramleys are famous for being a very tart apple, they will keep getting sweeter if you leave them on the tree after they’re ripe.

They’ll also gradually go a bit more yellow, and get a redder stripe on the skin. They can even end up ripe enough to eat raw – as long as you like your eating apples pretty sharp!

However, a word of caution from one of our Grow Great Fruit members (whose family, coincidentally, hails from Southwell, the birthplace of the Bramley). Her experience is that Bramleys don’t store as well in Australia as they do in England. This is probably due to higher temperatures when the fruit is picked, and then afterward when it’s being stored. In most climates in Australia, apples will always store better if refrigerated, even in winter.

Caring for the crop

The Bramley is a large irregular-shaped apple. They start out sort of reddish, as you can see in the photo below.

You need to thin your crop every year. This means taking some of the fruit off when it’s tiny. Bramleys really grow quite huge and need a lot of room to grow. If you leave them to grow in bunches they can push each other off the branch, or end up smaller than they would otherwise.

Pests also love to hide in the spaces between bunches of apples. It’s much better to leave them hanging singly. We normally do our apple thinning in November, and try to get it all finished by the middle of December.

Like all fruit trees, it’s a good idea to protect the crop from the birds and any other predators that might like to have a munch on them.

For us that includes kangaroos, but luckily they are deterred by nets. If you’re going to net your Bramley tree, put the nets on just after thinning, and leave them in place until you pick.