I used to have a recurring nightmare of waking up and realising I’d slept through an exam, for which I’d done no study and upon which my future success depended. It’s a leftover from my uni days, and is so real that I’ve never been quite sure whether this actually happened sometime in my distant past. It seems unlikely, as the nightmare is about a maths exam and I can’t remember ever studying maths, however my student days are a little hazy due both to the vast passage of time that has elapsed, and the amount of alcohol consumed at the time! Whether or not it really happened, it’s a lingering image that colours my feelings about studying and exams.

Imagine my delight, then, when a box arrived by courier this week containing two massive folders of course work for the upcoming Company Directors Course in Canberra. Plus a case study I need to read and absorb before the course starts. Plus the registration details for the online “Interpreting Financial Statements” course, also to be done before the course starts. Oh, and then there’s the EXAM! 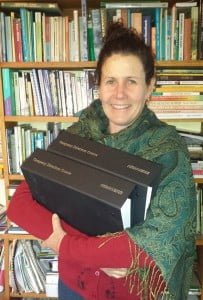 Delighted to be hitting the books again after a break of almost three decades!

Don’t get me wrong – I’m genuinely rapt to have the chance to do the Company Directors Course (which is part of the RIRDC Rural Women’s Award prize) and, to be honest, is one of the reasons I applied for the award in the first place.  I’m sure it will give me a new skill set that will no doubt make a difference in much of the work I already do in the community, as well as open new doors. I just hadn’t thought it would be quite so … big, and I certainly wasn’t counting on it involving an exam!

It’s not like I haven’t picked up a nonfiction book since I left uni – I last studied in 2012 when I did the Permaculture Cert IV. There was no exam, but a heap of course work, which of course I left until the last minute and then spent many a long midnight hour finishing by the deadline. Plus Hugh and I have done lots of short courses as part of our regular professional development for the farm, and I’m in the throes of finishing writing our 4th ebook about fruit growing (this one’s about pruning, and boy is THAT a big subject!). The difference is that the Company Directors Course feels serious!

I’m not a big fan of the whole “no pain, no gain” school of thought, but I’ve noticed since winning the award that I’ve spent quite a lot of time feeling vaguely uncomfortable, which I’ve recently realised is the feeling of being constantly stretched out of my comfort zone as I step into yet another new experience. When I look at those folders, I can hear the screws on my metaphorical rack being screwed another turn. Ouch!

On the upside, every single time I grab a new opportunity and let myself be stretched, the discomfort of anticipation inevitably gives way to the joy and relief of having jumped off a cliff (again), and thankfully finding that my wings still work!

I did eventually pass my science degree, so even if my recurring nightmare is based on an actual event, it clearly didn’t jeapordize my future success. In fact, though I obviously have a tendency to worry about things before they happen, I always seem to get where I’m aiming at in the end. I’m holding on to that thought as I head off to enjoy some light reading about company tax.